The news about this film has been troubling to say the least. By now the secret is out, the “twist” has hit the internet and riled people up. The film is a strong offering at points but there are major problems with performance, pacing, and thematics. I’ve sat around and contemplated trying to do a spoiler-free review, just to preserve the reveal (it happens quite early in the film) and I just…I can’t.

So spoilers from here on out, they cannot be avoided.

First off let’s get the great out of the way – this is Chris Pratt’s best performance thus far. He’s fun in Guardians of the Galaxy, he’s there in Jurassic World, but this is a whole new dimension for him. Pratt plays mechanic Jim, a passenger on the Homestead Company ship Avalon. They’re hurtling through space towards the planet “Homestead II”. While the film could have gone for the easy “evil corporation” angle here I like that they avoided it. Sure, the expense of the Homestead Company and the lies in its slogans are acknowledged at points but Pratt finds them justifiable and indeed even kind of adds a new slant to them.

The first chunk of the film shows him alone on the ship. He awakens alone and figures this out pretty quickly. The basics of this are all there – the panic, the fear, the drinking, the introduction of a robot, all the hallmarks of a man alone on a ship are involved. Then we get some Chris Pratt action. He plays basketball, there’s dancing with a video game, he eats at a bunch of different restaurants run by androids and gains absolutely no weight, and he gets snarky with bartender Arthur (played by the talented Michael Sheen). This is the best part of the whole film, watching him descend into loneliness and depression. It would have made for a middling but entertaining episode of Black Mirror, no “San Junipero” but acceptable.

Enter Jennifer Lawrence. Jim finds her pod and falls in love with her pretty face, but he manages to find her personality charming despite the film’s best efforts to make you hate her. She cracks bad jokes about drinking coffee and looking at the Chrysler building in archived footage, there are silly little moments with her books as he chuckles to himself, stating that he finds her funny but failing to convince us (this is, sadly, the blatant point of these bits of dialogue). Jim takes his breakfast next to reading her books on his futuristic tablet and begins struggling with the idea of waking her up. This gives us a break from Lawrence’s character and returns us to Jim, letting Pratt sink back into his performance and it once again gives the film a leg to stand on.

Once she’s awake the rest of the film are a lot of shots of Aurora, a mixture of distraught and captivated by Jim and the ship, and shots of him staring possesively at her. The film delivers some stunning visuals (when they slingshot around a sun on autopilot it is quite beautiful to look at) but as a whole it never recovers, instead settling into a middling sci-fi action film peppered with rom-com trappings. 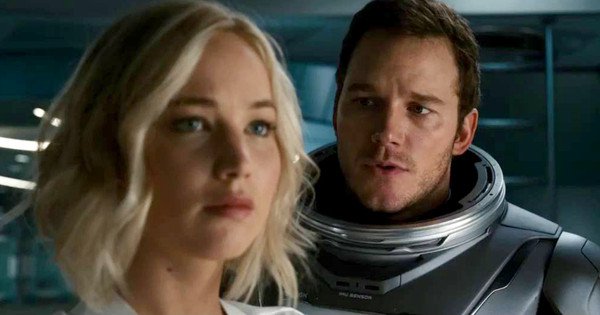 I didn’t hate this. It really isn’t an awful film, but the message is troubling. The entire point of the film is that a man can be horrible, do awful things (and make no mistake, by waking her up he’s murdered her), and be absolutely obsessive and stalkery towards you and it’s all fine as long as she loves him. This is beyond troubling and unsettling, the idea of the film attempting to justify Jim’s actions rather than following the thread of his deception all the way down the rabbit hole. The film comes close but, like Aurora as she stands over him with a pry-bar raised, it just can’t do it. It instead develops to a feel-good ending that allows Jim to get away with his actions and even live happily ever after, the sex and relationship that they had under false pretenses now solidified by a “well, I’ve got no other options” situation. They even allow an out, a way to follow it and allow Jim to suffer the consequences of his actions, but they use it instead to try to display the real love that these two have developed for each other.

This film is fine in ways, we have classics that are racist and misogynistic and still manage to stand the test of time. This one, however, is not good enough to justify its shortcomings and will not be joining those films. While we get a solid, at points great performance from Pratt it fails to save the film from it’s low points. Jennifer Lawrence, who phones it in with every non-David O. Russell-film performance, is par for her course and Laurence Fishburne serves no purpose that one of the ship’s computers could not have served, his inclusion in the film seemingly only to have another human being involved in the plot.

This is a fine matinee for those who aren’t going to be offended by the conclusion of the film’s themes, otherwise I’d say avoid it. I’m not mad that I saw it, but I’m slightly troubled by the things it tried to say to me.