Martin Scorsese is something else. He’s an enigmatic monolith of cinema.

Looking back over his films you can see that he has always had a fascination with religion. Within the last decade I’ve slowly let go of the one that I grew up in. This lapse, in a way, began with Scorsese with my viewing of The Last Temptation of Christ very much cementing my idea that even if there was a Christ, he certainly could not be what the organization believes without contradiction. That was the turning point, researching this film that was used as a way for the director to explore his view of Christ and human nature. The fact that it can be all of a blasphemy, a brilliantly-shot piece of film, and one of the most pro-religion films of its era despite the amount of anger it drew is nothing short of a testament to what Scorsese is capable of.

In Silence it seems he has is still searching for religious answers. His previous work has shown the struggle, a full display of what he wrestles with, but it was the interest of a young man who seemed to be aiming to not only provoke questions but provoke the kind of controversy he got. The whole thing was gripping. Throughout his career we have seen him try to balance between two topics – religion and humanity. Scorsese works a lot with human nature, putting on display our obsession with (not to mention glorification of) some of the most vile individuals. Here, though, we begin to see his softer side and that he has finally begun to calm towards religion.

The director has written a new forward for the novel this film is adapted from, one included in the recent American re-release. He discusses his faith, his belief in the adaptability of Christianity to embed itself in the cultures it permeates. As a catholic living in Japan, Shusaku Endo wrote from personal knowledge of the difficulty one faces when their faith and their culture clash. Scorsese commented that Endo understood “the conflict of faith, the necessity of belief fighting the voice of experience,” and we see this throughout his film adaptation in almost all characters.

Liam Neeson is our introductory character and a lot of the marketing revolves around his involvement in the project. He’s on the posters, he’s on the tie-in release of the 1966 novel that has recently seen renewed attention, and he’s in virtually every thumbnail for every article about the film in the buildup to the opening. This is all mildly funny because he is only in about 10 minutes of screen time, if that, and there is about two hours between appearances.

It is not Neeson that grips you in this one, it’s Andrew Garfield.

The film opens on several somber, beautiful, and horrifying shots of the mountainscape of Japan. Hot springs steam everywhere, and the heads of Japanese Christians sit on tables. Neeson is forced to watch as several are bound and tortured with scalding water. A voiceover sets our scene, and prepare for a lot of these because they are the driving narrative tool. Neeson’s scene transitions to a Jesuit college in Asia (I believe it is the one in Macau). Two priests who studied under Neeson are given the opportunity to go to Japan to find him after their passion moves their superior.

Adam Driver and Andrew Garfield contrast in a lot of ways and call equal attention in these early moments, the camera keeping them both in frame quite often. A split begins between them, though. They argue over the proper stance of Christianity in Japan, they try to help the people in the small villages, but Driver is angry and aggressive. Garfield tells them that “it is okay to tremble,” offering a semblance of peace to them even as Driver pushes them to action. A local, named Mokichi, gives Garfield a handmade crucifix as they weep and pray together while we see Driver off in the background, visible between them and alone in his anger while Garfield’s statements of passivity and faith lead to his bond with the Japanese villagers.

And Garfield’s role seems to be one of a Christ figure – a martyr destined to make his impact on the Japanese culture through death and suffering. Japan, however, has a different idea in mind for him as it forces him to come to terms with the reality he dove into at the start of the film. It asks him to find the balance between faith and function, to show respect for both his culture and his beliefs. In this the character finds something more, something lasting. He finds silence, which is no small thing.

Scorsese makes a lot of peace in this film and, indeed, of silence. God himself is silent, his human devotees on their own in the world. God is not a Japanese concept and has a lot of trouble making an inroad to the Eastern cultures. This is one of the main struggles for Garfield’s character in the film, his narrative voice-overs contrasting to his suffering, his courage, and perhaps even his misguided attachment to the mysticism surrounding Christianity instead of the faith he teaches. Screaming, physical symbols, mantra, none of this contains the answers he is looking for and the end of the struggle that he is working through.

An interesting question is posed: where is God? This is something Martin Scorsese has struggled with all of his life, or so it seems. He swings back and forth between belief and outright aggression towards religion and maybe, just maybe, his point is that you can be a part of both mindsets. Silence doesn’t answer the question “is God real?” It doesn’t answer the question “is faith cultural or is it truth?” He poses both of these questions and hints at answers, but the films final moments leave us open, the narration and imagery contrasting with many of the things that the film has said. Even through all that we have seen, the idea lingers. The hope and faith linger, and whether or not it has base or grounding is up to the viewer. 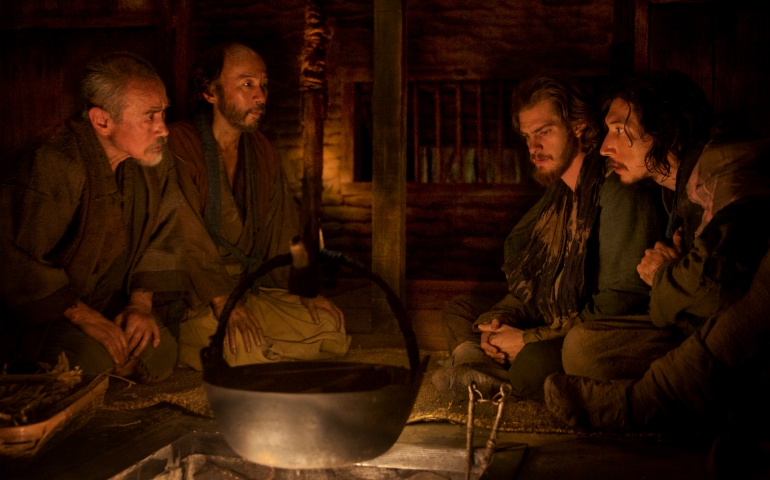 I’m an agnostic these days, it takes a lot to shake the dust off of my childhood beliefs and call them to the forefront of my mind. Scorsese has done that magnificently. He’s not urged me to go back to church, he’s not pushed me to read my bible or pray every day. He’s definitely reinforced my thoughts that so much of it revolves around human concepts, the chanting and the obsession with artifact very much in contrast to what the message is. Scorsese simply asks us to look in the silence, the listen for a voice. It might be our conscience, it might be God, but it’s in the silence that the answers wait. A cinematic master has brought us one of his more interesting films. It will not be remembered as one of his best. It just isn’t as fun as Goodfellas or Wolf of Wall Street, the imagery does not have the staying power of Taxi Driver. It will not be something people hold up as a highlight in his career, but it stands as such nonetheless. A powerful film that asks questions with no solid answers, but one that is masterfully executed and performed that calls us to stop and listen to the silence.