I missed The Sixth Sense and Unbreakable when they came out but, somehow, managed to stay unspoiled. I saw Signs in theatres and loved it, the same with The Village and by the time I watched the latter I had gone back and seen the big ones. It was enough to declare myself a fan.

But then Lady in the Water came out. “Fair enough,” we said as we got a bit excited for The Happening. We were once again let down, and due to The Last Airbender, After Earth, and the Shyamalan-produced film Devil I was ready to quit. I begrudgingly watched The Visit and, while unimpressive on its own, in the context of the director it was a step in the right direction and decent enough. But Split is something else. This is actually pretty damn good.

I watched this without much hope, I won’t lie. Decent critical reviews aside, it was a Shyamalan movie and that just doesn’t get my motor running but I figured it might make a good matinee. I like James McAvoy enough to give the film a watch. And I’m so very glad I did. I’m very glad I got to be there when Shyamalan made another good one.

Split is a thriller about a man with Dissociative Identity Disorder, formerly known as
Multiple Personality Disorder, who kidnaps three girls for an unknown reason. From here the plot diverges in strange new ways surrounding psychology th 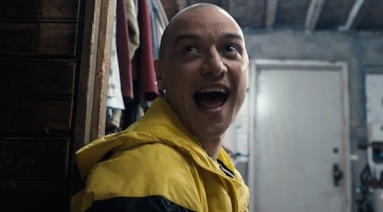 at was, to be frank, more popular about twenty years ago. This is not to say it is disrespectful of the disorder, but it paints it in a stylized light that has drawn controversy and may lead to a misunderstanding of the illness. Nevertheless, this is masterfully portrayed by McAvoy, who is one of our finest actors at the moment, and he gives each personality a unique flavor that helps it stand out from the others. A particularly interesting moment emerges that shows him switching back and forth between several of the 23 encased in his mind and these transitions are seamless. It is an excellent example of pure performance and I loved every second of him onscreen, particularly his interactions with Dr. Fletc
her (Betty Buckley) where he gets to play with his personality a little bit.

Also of note is Anya Taylor-Joy, who made waves as Tomasin in The Witch last year. She isn’t as impressive in this, but she doesn’t slack off. Her time onscreen has some quiet moments tha 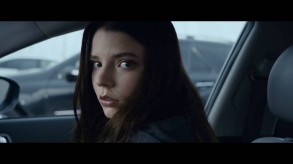 t deal with flashbacks to the character’s youth and in these moments she moves somewhere between impressive and corny, which somehow seems perfect for a Shyamalan film. Her fellow teenagers, her partners in captivity, are Claire (Hayley Lu Richardson) and Marcia (Jessica Sula) who do just fine but are highly overshadowed by McAvoy and Taylor-Joy.

I will admit that this won’t wow anyone. It’s a fun thriller and is a resounding joy to watch simply due to the fact that Shyamalan has pulled off an excellent movie at la

st, but I don’t know what kind of staying power it will have. As a film it’s fine, but that’s most of what it is. It’s great fine, it’s fun fine, and it’s really well-done fine, but it’s fine. I think it stands a chance at reaching both hardcore fans and the uninitiated alike and that’s a good thing. I really hope this is the start of another wonderful period from the director, and I think if this keeps up we’ll get just that. This is definitely a film worth watching, both in context of the director’s larger work and because it’s just a damn good movie.