No matter what, I’ll never have it said that I didn’t think this was a blast. This is as much fun as the first one, even if it isn’t as good. Beware ahead, spoilers abound!

James Gunn has returned to us with yet another fun, exciting, and even emotional Guardians of the Galaxy film. You won’t have more fun with a Marvel movie, that’s what he’s proving. Just from our opening scene we’re given adorable Baby Groot dancing his way through a fight scene, a large and gnashing creature behind him. Everyone gets their moment right off the bat. Drax gonna Drax, Star Lord gonna Star Lord, etc., and the cast still shines with fun and dynamic chemistry. The snarky, sarcastic tone of Marvel films has started to get old with the last few movies but this is one where it fits the characters and directorial style perfectly, enhancing it rather than forcing the film to be fun. 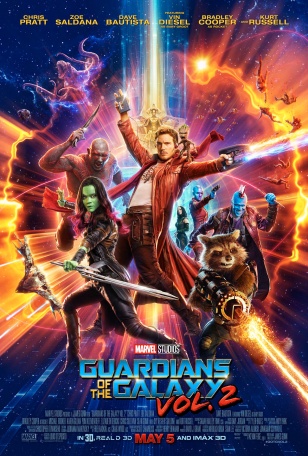 We’re given a treat in the form of Kurt Russell this time around. Additions and expansions to the main group, as well as a separation of characters, is necessary in well-executed sequels. Kurt Russell plays Ego, a living planet that creates avatars that look like aged 80’s action stars. The most recent avatar goes to collect his son, Peter Quill (Chris Pratt) and takes along Mantis (Pom Klementieff) to keep him relaxed.

Her powers are something I was unfamiliar with going into the film and seeing that…well, she’s kind of an empath mixed with a living roofie/antidepressant was interesting. I think she was ultimately underutilized and would love to see more of her in Vol. 3, but for what we got there was a ton to like in this new character. One of the things they really played up was the super-literal interaction with Drax (Dave Bautista) as a way to build not only her character but also a friendship. I like the two of them and hope we get more from them in the future.

Now let’s get to some things that I have both a lot of love for and a lot of issues with – Yondu and Ego.

This film was clearly aimed at making a Swan Song out of Yondu’s character arc, the interactions with virtually everyone around him used to build him in a way that the first film just didn’t. This isn’t to say that he was anything but the best part of the film, because he definitely is. Rather, it just felt that in a story about all of these characters dealing with their respective issues Yondu got extra attention.

A for instance – Nebula and Gamorra. These two have had a conflict brewing since the first film and we finally get their talk, the bit of sisterly assaults and affection that was necessary at this point. But because we’re spending most of our film with Yondu or with Peter and Ego the girls get lost in the mix. The same with Rocket to a degree, as well as Drax and Mantis. While in the first film we got a balance of emotional drama with each character (Rocket’s scene discussing his origin is heartbreaking in that one) this film fails on that point, making instead a movie about fathers and sons but still trying to bring everyone else to the forefront and making a jumbled mess out of parts of the plot. The characters get lost in the thematics despite having screen time because in the end it just isn’t enough for anyone but Yondu, Peter, and Ego.

Except Baby Groot. He doesn’t get an arc or a thing to do outside of being adorable, and it works really well.

Ego himself stays excellent throughout the film but about 3/4 of the way through he’s revealed to be the villain. This bothers me because there was only two lines of foreshadowing and other than that it just pops up. Comics fans might have anticipated it, but for a casual viewer it’ll seem like a bit of a hard left turn. This is one of my only other major problems in the film. For all of the time Gunn spent writing a film about fathers, sons, and the complexity of their relationship…he could have put a bit more effort into building a villain. Once Ego disappears back into the planet his lack of presence is felt and the Guardians are just…trying to blow up a world. There’s no one to bounce off of for a solid twenty minutes, and even when he comes back and there is we are given a bit of a tonal miscalculation with Quill fighting him as Pac Man. Don’t get me wrong, I laughed my ass off, but it was just a weird gag in a heavier moment, a climactic moment. Ego had only just returned to be villainous and we lost out on what he could have been.

I will say the soundtrack is once again a central part of the film and an incredible mix. It doesn’t have the impact of the soundtrack of the first one, but it definitely works. There’s just no “ooga chakka” to latch onto, to make us sing it and have it stuck in our heads. Outside of that it’s an incredible mix of music (any excuse to listen to “Fox on the Run” is a great one).

At the end of this whole thing you’ll roll your eyes at all of the end-credits stingers (there’s 5, good god) but it’s a fun film that really does manage to invoke the feel of the first film while building on at least a couple of the characters. You’ll feel it when something bad goes down and it’s because Gunn has spent the time he needs to make sure we do, to give us that emotional gravitas despite it taking away from other things. Overall this is a bit more than your average Marvel film and the Guardians movies still manage to stand apart, being something all their own and exciting to see. More Marvel films could learn from this example, to break the formula and be more daring. James Gunn is doing a fun thing and a necessary thing, and it still works like a charm.