When I was younger the show Samurai Jack hit like a ton of bricks, and the advertising left me fascinated. I was 13 years old at the time and sort of self-conscious about still watching cartoons at that age, but it was incredible enough that I powered through and loved every second of it. The animation style, the lineless figures and landscapes, mixed with the minimal dialog action sequences, all of it really worked out perfectly.

Then it ended, and I was livid. The story was not over, but Cartoon Network chose not to continue. Through the years several options have been explored, from a tv movie to a live-action rendition to wrap up the show. None of these came to fruition.

Genndy Tartakovsky returned this year with a final, mature-themed season to wrap up the story and allow Jack the ending he needed. We leap 50 years into the future of the show, where he has not aged due to his displacement from time. He has also lost his sword and is hallucinating ghosts that tell him to kill himself, all of that kind of lovely introspection. 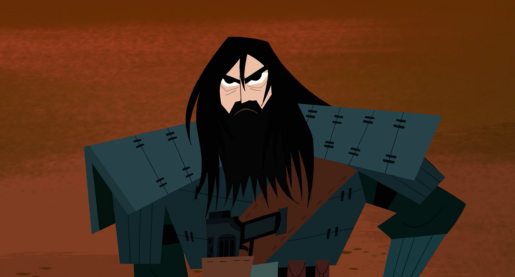 Something we have to get to right off the bat – this is very much the adult Jack that the show had previously held back on, and rather than just go for it with little explanation we’re given reasons. Jack has never killed a real human being before, and that’s a plot point. He’s slaughtered hordes of weird alien things and robots, with goo and oil serving for blood, but we finally see him kill and the results are gruesome. The themes of guilt and horror tie in nicely with what is done, with Jack making a choice based on the choices of others at last.

There are themes and desperations at play in the storyline this time around that lead to a more interesting story, and possibly the best of the entire series. Something interesting is Jack’s journey from the premier to the midpoint in the season. At the beginning he’s…well, Jack is suicidal. He’s running around on a motorcycle, brandishing guns and all sorts of other weaponry, cutting through the wasteland of Aku’s world and battling his worst enemy. Our samurai has begun to fight himself, lost and alone with no one and no hope. All of the time portals have been destroyed and his sword lost, he has nothing he can do other than just destroy hordes of robots.

Jack’s suicidal tendencies due to his lack of ability to win his eternal game alongside his depression and guilt at failing lead him to hallucinate. He’s completely insane at this point and by the time he’s bleeding and desperate the will to fight on is depleted. He wants to die and he sees his family in the rivers, a ghostly specter calling him home. When the assassins come for him it is a turning point, one that spurs him back into action.

This also leads the story in a direction it has never gone – romance. Ashi is introduced as a daughter of Aku (literally, he gives a bunch of cultists his black goo from his finger and

they impregnate themselves with it) and she spends the first half of the season trying to kill Jack, her entire mission in life programmed into her by the faux-mother that raises her and her sisters. The Samurai not only slaughters his way through the other girls but takes her captive and attempts, successfully, to save her life and turn her. He also falls in love with her, which leads us to an ending that matches the tone of the season. Jack will never truly find happiness, this was determined from the start. Even if he defeated Aku he would never be able to be at peace or attain his goals, the bittersweet cap to the story being well-earned and necessary at this point.

The ties between Aku and Jack are difficult to read. The samurai desperately seeks his nemesis and Aku just hides, cowering in his castle. In the end he overplays his hand and underestimates Jack’s devotion to his destiny, as well as Aku’s own daughter (yes, Ashi is 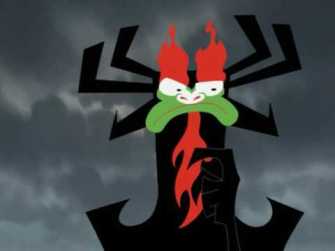 technically his daughter) and his demise is magnificently ironic. Our hero and villain finally come together and in the end it was Aku himself that did it, making Ashi on a whim and allowing her to help Jack not only find the sword but to return to the past. His final vengeance is that Jack and Ashi can never be together, and watching our samurai let her go in the final moment with the ladybug flying away (a visual tie-in throughout the season) was such a heartbreaking moment.

It is astounding what Tartakovsky can do with twenty minutes, each episode filled with eye-candy and hyperbole and even silliness but nothing ever feels out-of-place or like wasted space. He knew there were only 10 episodes and he used each one to build to a conclusion. Do I want more? Of course I do, but what he accomplished at the end here is one of the greatest final seasons in recent memory.

In its conclusion, Samurai Jack remains one of the strongest animated series in recent memory and does more with more gravitas and subtle, quiet moments than I would have thought even given the show till this point. It is an astounding accomplishment to see this return, and as a fan I could not be happier with the result.

Samurai Jack season 5 is available on Google Play, iTunes, Amazon Prime, and in the Playstation Store. I’m still awaiting the announcement of a Blu Ray boxset with impatience.