Spoilers for all 3 Apes films ahead. I warn you, the article is gobbeldygook and a nightmare if you haven’t seen all 3 films but I promise it’s worth your time.

Over the decades in film we’ve had several adaptations of the Biblical Moses story, from the everlasting Heston vehicle The Ten Commandments to Ridley Scott’s misguided film Exodus: Gods and Kings. Often we get something new brought to the table but it is rare that it lands, each new incarnation of the story seeming more and more tired. Biblical epics are few and far between these days, the culture swinging away from Theism and further and further into the territory of the Atheist culture that is developing in Western storytelling. Each new incarnation of Moses stays the same, a conflicted white guy looking to liberate his people from bondage.

So it seems wonderful and strange when we get a true new take on it, something so wrapped in other ideas that the main thematics are buried under something more palatable to a modern audience. American film culture is experiencing a new resurgence in its love for sci-fi, with things like Star Wars and Passengers using big-name stars and nostalgia for premise to draw in audiences. Things like Planet of the Apes seem old-hat, cheesy in comparison, in a modern age, but when tied to even older stories they can become beautiful adaptations of something we didn’t even know we wanted.

Enter the new Apes trilogy, a story about Caesar leading his hairy brethren out of bondage and into the promised land. Each beat in the story is about love and loss, about pain and suffering in service of saving a downtrodden people that suffer under the heel of those above. They aren’t building pyramids, no one is crying out to a God to save them, but the character leading the franchise manages to call to mind the story of Egyptian servitude nonetheless.

Caesar is born into a world he doesn’t have a chance in, a world where his people are held in bondage. Rather than building structures, his people are slaves to something smaller – human genetics. He is snatched from his people, his culture, and saved by someone from the upper-class of people to live a life of comfort and shelter. Even the first reveal of the baby ape in his new home, the image of him in that box wrapped in a blanket, calls to mind Moses in his bulrushes. James Franco’s character, Dr. Will Rodman, has taken him home in hopes of saving him from certain death as a purge is enacted. Sound familiar? He is lifted from the box and given a new name, the name of a powerful leader, but it is a standard of the franchise rather than something more on the nose. I think if they had named him “Moshe” I might have sniggered in my seat instead of being held rapt.

And the liberator hits all of the familiar beats.

He kills a slavedriver, Tom Felton’s character Dodge Landon, in order to break out of the abusive sanctuary in which they are held. His people follow him only tentatively at first, the trust having to be earned, but he rampages across the city of San Francisco in order to snatch as many of them from their shackles as he can before feeling across a bridge to a more promising land.

This should not feel unfamiliar, as Moses also needed to run away from the law after murdering a slavedriver. He left the body and fled across the desert, coming to rest in the land of Midian. Here, he found his wife and had his children. There was a peace, an idea of freedom. This never wound up being enough, though, as his people were still slaves.

We see this in Caesar, the idea of holding on to the dream of peace. After running away from his adoptive family and home, he comes to rest in the Miur forest as the world is savaged by the Simian Plague, which makes apes smarter while humans bleed from

every orifice. The metaphor takes several divergences in the second installment, and this is a big one. At the beginning of Dawn of the Planet of the Apes we see the character at mixed points, all taken from the life of Moses. He’s comfortable in his Midian and also wandering, their established home by premise ready to fall. His people grow restless when the humans arrive, the tentative peace held together by sewing thread and chewing gum, and his own people cause it to fall. They liberate themselves at this point, through violence and aggression, by forcing a strike back at the humans. Instead of darkness, instead of frogs, we’re given a plague of apes and disease. Humanity is dying out, barely holding on, and they are gasping for air. Instead they get beasts, intelligent and desperate as they are, descending on them and forcing them into a servitude all their own.

This world has already sacrificed it’s firstborn, with Gary Oldman’s Dreyfus having lost his and Woody Harrelson’s The Colonel having murdered his own out of fear. The plague of darkness has descended, with the Angel of Death attacking in the form of Koba. And the apes lose too, with Rocket’s son Ash is killed after refusing to put faith in the new world order. He clings to the past, and is killed for it despite his stance being the right one.

Death is a wonderful part of the Moses mythology, with it always lurking just out of sight. Moses is constantly under its shadow, from the moment of his birth, and it comes back to haunt him. Koba does so with Caesar, his beastly appearance coming back to strike fear and resignation into the lead ape. The shadow of his guilt hangs over him, mistakes eking 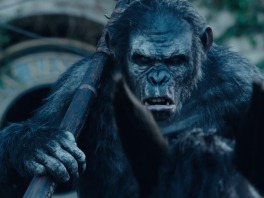 in at the cracks of his sanity to force themselves upon the chimpanzee as he hangs from a cross at the brink of death. In this moment he refuses to get up and while our Christ metaphor seems to want to break out but we get back to our Moses story quickly. There are a few parallels in the myths and we see them come together onscreen in the final Apes film.

And it’s the idea of death that finally completes Caesar’s arc as ape-Moses, the finale bringing him to the valley. As he takes his people from humanity they wander the desert, afraid that nothing will be on the other side even though they believe in the wondrous valley promised by Blue Eyes, Caesar’s son. The firstborn is yet again killed, a scene that brought tears to my eyes (seriously, it’s brutal), and we get to see the angry side of this Moses. His people have suffered and the pain has been brought way too close. While Moses’s wife and child got to enter the promised land, our hero loses his wife and firstborn son to their tormentors. All of it is in service of fear, the idea that what frightens us must be burnt to ash. We kill what we’re scared of, it’s human nature, but when it is alive and able to think of ways to fight back there comes a different opinion. The fight is not to keep slaves but rather to survive at all and, in the end, humanity seems like they aren’t meant to survive. And the apes eventually cross the desert to their land of prophecy, but like Moses we see that Caesar is not allowed to enter. This is also due to his own arrogance, as if he had done a few things a little differently he might have made it. Instead he looks down from his Mount Nebo, gazing at the land they’ve fought and struggled for, and dies at peace. The leader has saved his people, and that is enough for him. Moses perished on Mount Nebo, alone and lost to his people, and looked down on the land of their birthright without being allowed in. Caesar is given a much kinder view, one of rest instead of punishment, but it is all the more painful to see as he has fought so hard for this peace and quiet. In a way he achieves it, but he is allowed to finally go gentle into that good night with his best friend Maurice by his side.

The story of Moses is one of my favorites from Biblical lore and has suffered as of late, the discussion of whitewashing in Hollywood and half-baked adaptations pushing it down as it struggles for air, but what Andy Serkis has portrayed is a new version, one covered in fur but no less compelling than the best of portrayals, and when you step back to look at the narrative as a whole you can see a glorious adaptation of the Exodus. It’s a powerful metaphor that only serves to further the wonderful storytelling that Reeves and Wyatt have put together in this new Apes trilogy. When this all began 7 years ago I was worried about the quality, the original film series something so close to my heart, but I could not be more overjoyed with the results. The story of Ape-Moses comes to a close but further entries in the franchise are on the horizon and I can only hope that they hold themselves up to the quality of this story.