Welp, all that just happened.

So we’re forty years into the existence of Star Wars and this is the latest installment. The franchise has endured soaring heights (The Empire Strikes Back, The Shadows of Mindor) and it’s suffered near-crippling defeat at the hands of eras like Bantam Spectra’s publishing and Lucas’s prequel trilogy. When Disney brought it back with The Force Awakens in 2015 it was an instant success, but the film was befuddled with accusations of pandering to a nostalgic audience by remaking the original film. These statements were not unfounded, but the execution saved the film and elevated it in the eyes of the public to make it an instant financial success.

Enter Rian Johnson and his middle installment in the new trilogy, The Last Jedi. Disney has maintained their excellent marketing techniques for this film, with mystery and blatantly vague moments peppered into trailers that evoked the same sensation as the marketing for the last numbered film. While it was blatantly obvious that these bits were different moments edited together to tantalize, the tricks worked and sparked conversation online that brought a lot of us theorizing and shock.

What we got? The word “fascinating” is probably the most accurate. I’ll say that I very much enjoyed this film, but I was beyond weirded out by it at the same time.

Divert your eyes if you haven’t seen it yet because I’m completely spoiling this. There’s no other way to talk about it.

So let’s delve into the best of this right off – Mark Hamill. I’ve been a fan since youth, devouring everything from his voice acting to his performances as Luke Skywalker. This is, hands down, the greatest performance he has ever delivered. Hamill is very much a curmudgeon in this film, angry and guilty as he waits to die in his island shelter. He came to stick around and hide from the galaxy at large, the guilt over his moment with Ben Solo being the thing that has ravaged his soul for decades.

And Rey really does take most of the film to get through to him. She spends a good amount of time hammering at him from the sidelines, demanding his time because she needs to know who she is and what she should be doing in this wider world that she has joined. But the telling moments between these two characters is the moment in the rain, outside the huts, where she confronts Luke on the truth of his failure.

Throughout the film we have Kylo and Rey communicating through the Force. It grows from antagonistic conversations, Rey angrily lashing out at him because she is still reeling from the death of Han Solo, and Ren calmly defends himself. Christianity will tell you that the real fear in the devil is the attraction of him, the soothing reality he offers versus a broken ideal. Kylo Ren offers much of the same to Rey, slowly breaking down her defenses enough to tell her what he believed happened at the Jedi temple. And she buys it, with Ren accusing his former master of attempting to kill him in a moment of fear and panic. Luke did indeed switch on his lightsaber and prepare to attack Kylo Ren, but the truth of the matter is even more complicated. 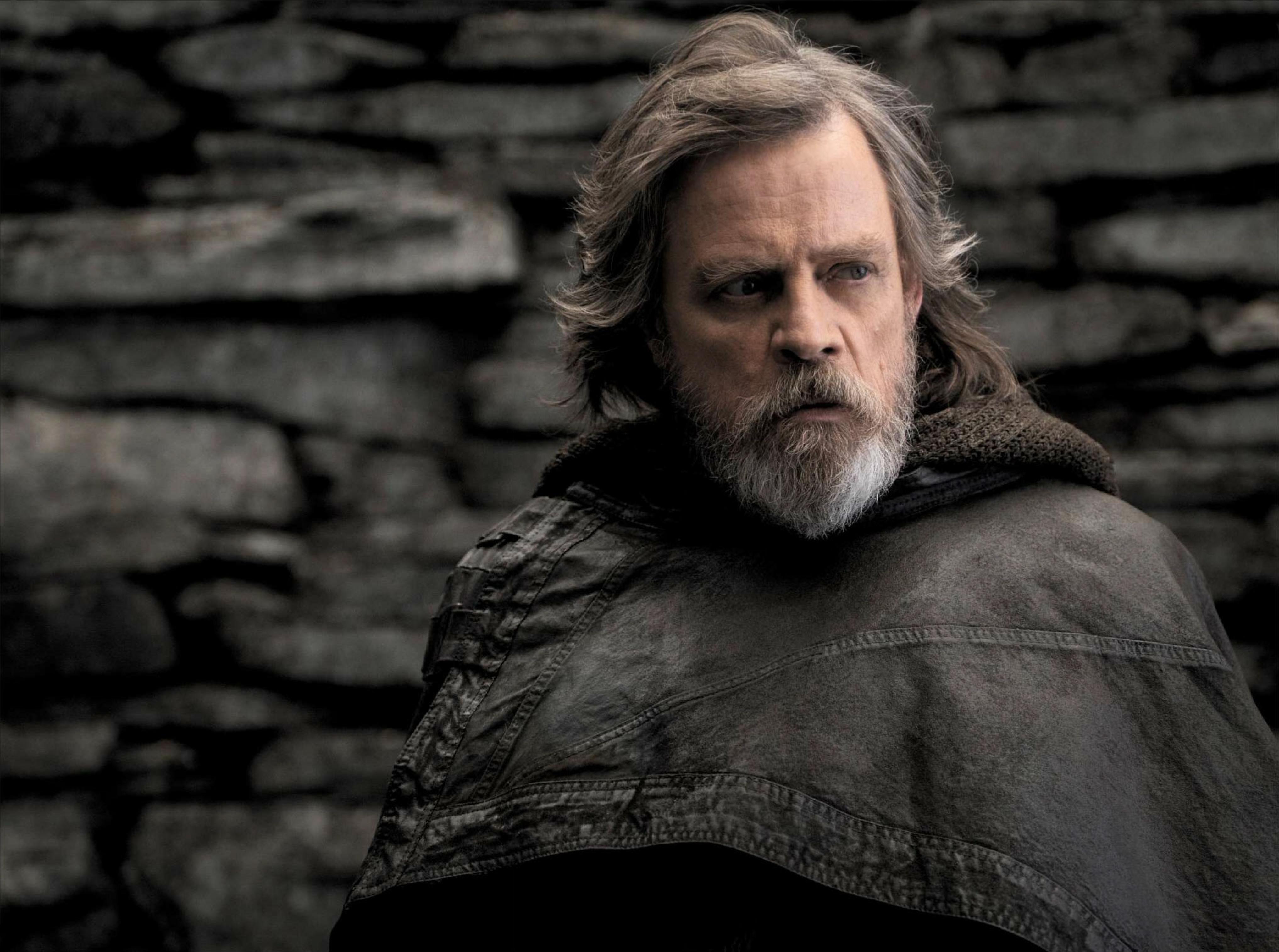 Luke’s arc is probably the best in the film here. Like Han Solo before him, he is reluctant to allow himself to be caught up in this war and it’s mess again. He spends a majority of the film trying to convince Rey of his point of view, his belief that the Jedi are an outdated concept that needs to be eradicated. He cites the prequels, the arrogance and piousness of the Jedi being their downfall, and his arrogance in trying to bring them back. His moment of weakness, however, was the true breaking of the Jedi. Luke is dealing with the guilt of failure, but it isn’t about failing the Jedi. It’s about failing Ben, his nephew, and in turn failing his sister and his best friend.

And Ren isn’t wrong about this. He’s ready to be done with all of these broken father figures. Han Solo wasn’t the greatest dad, Luke contemplated murdering him, and Snoke just speaks to him as a blunt instrument. He’s sick of being second to these larger-than-life names and has, in a way eradicated them all. His final confrontation with Luke’s Force projection is a moment of blind anger, his vision unable to focus beyond his feelings, is both a triumph and a failure for the character. Luke Skywalker dies, plain and simple. The strain of projecting himself through the Force onto a world half a galaxy away is too much for him and it is his end, but it is one he chooses as a way to save everyone.

And this is his hero moment. This is where we get the first non-disappointing father figure of the new film series, with Han and Snoke being our other disappointing parental role-models. There’s no one left now, nothing to disappoint us.

And let’s talk about that. Let’s talk about Snoke’s death. This whole series of events is one of the most baffling and interesting in the entire film. Rey leaves her master, as Luke did his own, for a selfish errand that is foolhardy and poorly-thought-out. Her journey to Kylo Ren is interesting, with the expectations constantly juggled around from this point on. Snoke’s death is one of the most disappointing aspects of a fascinating series of events. We get the Rey/Kylo team-up, we get the imagery of that throne room, but what we ultimately get is Snoke being killed with minimal screen time, no real threat presented, and no backstory revealed. When Hux and Kylo take over the First Order it feels like two children who have found their abusive dad’s gun in the wake of his funeral and wield it at the world, angry and ready to take everything. Snoke is completely wasted, but he is sacrificed in order to give Kylo something more to his story. So…not really win-win, but it’s not as bad as it could have been.

Rian Johnson seems to have completely gone his own direction in this film. Abrams thought we’d be curious about who and what Snoke is? Well Johnson doesn’t care. And what about Rey’s lineage? Johnson thinks it isn’t important, and on that one I actually agree. But there is one thing I really don’t like in this – Finn and Rose’s plot.

That plot is completely unnecessary. The film is the longest in the Star Wars franchise and yet this plot could have been completely removed from the film without changing one thing. It’s cheap, it’s lazy, and it doesn’t justify its existence. I don’t mind political statements in film, I actually love it, but a forty minute diversion to discuss war profiteering and animal cruelty that doesn’t have any impact in and of itself needs to be taken from the film. The fact that this character, who struck so many in the first film as a fun new addition to the universe, was unable to serve any real purpose in this one is a mark of my trouble with Johnson’s film. I love the idea of a new direction, new additions to the lore, and expanding the universe but you have to justify your divergences by having them be relevant and meaningful to the plot. I think the arc that Finn goes on is interesting, but it ultimately means nothing to the film at large and that’s an issue.

What Johnson delivered to us is big, bold, beautiful, and flawed. The film is about the disappointment with father figures, about subversion of expectation, and about the empty resolve that absolution of guilt can bring. It’s about pain, love, and superpowered flying Leia. Almost nothing in the film is predictable or easy, and while not everything lands I think this will go down as a powerful film that will be talked about for decades to come. While The Empire Strikes Back is discussed because it is universally accepted as the best film in the franchise, The Last Jedi will most likely go down as the most controversial of the non-prequel films. I think what Johnson has delivered is stunning to look at, emotional to feel, and absolutely shocking to those versed in lore. The film is one that will take at least two viewings to make a real decision about, but the whole of the film is going to be more than we bargained for and it’s still too early to tell if Star Wars has made a misstep here.

Go see this. Get it out of the way because the discussion will be just as fascinating as the film itself.