“Shot Through the Heart” is a weekly segment in which I rant about a story that means the world to me. Each week we’ll go over a film, book, short story, or game that touched me in ways that are hard to put into words without them just turning into word vomit. This week we discuss one of my favorite episodes of television – The Twilight Zone‘s 1961 episode “The Obsolete Man.”

I’ve been a crochity old man when it comes to New Year’s Eve for a while now, ditching out on parties and champagne and falling glitter to instead stay up with a friend and watch The Twilight Zone 24-hour marathon that airs annually with him. I love watching the show but there’s something about feeling like the series is on shuffle (seriously Netflix and Hulu…add a shuffle button) that excites me. We stumble upon things and I still wind up finding an episode here or there that I haven’t seen before or had forgotten. But we both have one that we wait for, holding out hope that the next episode will be our personal favorite. 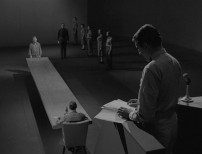 “The Obsolete Man” is that episode for me. I still remember the first time I saw it, sick from food poisoning and holding a bucket just in case the worst happened. I recognized Burgess Meredith from other episodes (not to mention Clash of the Titans and Rocky, which are also awesome) but what struck me first was the setting. A gray room, a long table, and fascists as far as the eye could see. I knew, even at that young age, that I was seeing something still shockingly relevant. When Meredith is rendered obsolete because people aren’t allowed to read anymore he lashes out, unafraid of the system. In a world where the United States exists in a constant state of tribalism, of aggression and anger at those we believe are “obsolete,” it still sticks.

before him. We know little of how he spends his days, little of his life before his sentencing, but he is a clever and intelligent man. His opponent is not a mere man, though he is embodied by one, but rather “the state,” a governmental entity that designs itself as the ultimate final word in the worth of a single individual. This hero, Romney Wordsworth (pun definitely intended, this show is not subtle), refuses to allow himself to be defined by anything other than his chosen life – that of a librarian. His profession is treated like that of a drug peddler, a man who would wash the people out with a pastime opiate instead of something that is deemed important like state service and the aforementioned tribalism.

I’ll cut right to the chase (just know that I’ll call out both sides of the arguments here) – we live in a culture that is currently in the struggle between the ability to learn, to find messages in our stories and our own identities, and those who see intelligence as an enemy to be assaulted. Lives are spent fighting against the “ivory tower egg-head,” the individual that is seen as a stereotype reading alone with nothing of value to contribute. These same individuals that want to see free-thinking and individual personalities as treasures to be prized are under attack as people who see them as someone that would corrupt your children, who would ruin them with non-traditional views and the desire to destroy all that is held dear by a segment of the country with no desire to change and see the world move forward. Wordsworth embodies this entire stereotype, which makes one aspect of his personality so fascinating to me. He is a religious man, staunchly hanging onto a faith that those in power have deemed “obsolete.” His final moments are spent calling to his god, the weeping chairman panicking in his fear of death (I know, I talk a lot about death…). 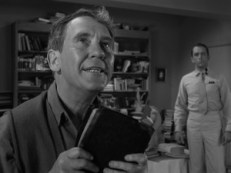 My own struggle with faith, with the pros and cons of it all, have played a heavy factor in my life lately and church was drug back into it in such an unexpected way. I won’t pretend to be a religious man because I’m just not, preferring to keep my beliefs private and personal, but Wordsworth’s stance is inspiring. Standing up for what you believe, even to the point of death, is something that is becoming a harsh reality in the public eye and to know that it was touched on so poignantly, so painfully, over fifty years ago is terrifying. We live in an interesting era for religion as it begins to wane but I still firmly believe that for those who use it to make themselves better, to hold fast to things they believe that drive them to help others and educate people and be kind to people, can be a wonderful thing. It can be weaponized as violently as the cruel views of the aforementioned state, but when seen as nothing but pure love and acceptance religion can be a powerful and caring place for those that partake and Wordsworth is the representation of those principles.

And let’s talk about the state, as represented by the chairman. His thinly veiled Nazi imagery is so overtly villainous that one can’t help hating him. Right down to the costuming, barely hiding a comparison to Hitler’s SS, he is portrayed as one that loves control versus thinking. His hatred of reading, of those who cannot serve him, and of those who believe in anything but his own idol, is a harsh view to stomach when held up today. I stumbled on this episode years ago and it only becomes more cutting as I age. This man, this state, is not something that we’re looking back on and thinking “thank goodness we dodged that bullet” (though many paint it that way). We’re still in this fight today. 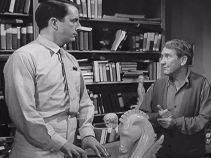 But the state’s chairman calls out an argument I want to present to everyone – that of the obsolescence of the previous generations. So often we hear those in favor of progress rant in favor of just “waiting for certain people to die” and allow new thinking to move through. So often we make excuses for previous generations, stating that “they just didn’t know better back then.” There have always been those that know better. My own father has tiraded against racism, a quality that others in his family have been very happy to seep out of their pores. There have been people in each era of human history that knew better than many of their peers, eschewing the stereotypes. Without these people we wouldn’t have had anything like the Underground Railroad, the Million Man March, or even something like the Stonewall Riots. Previous generations have always known better, we just don’t always get to see everyone admit it. In this we see that the state is wrong in a bigger way. They want everyone that disagrees in any way to be done away with. Wordsworth calls death “the great equalizer” and invites the chairman to join him in it, with little choice, and challenges the idea that any human being is obsolete.

Even outside of modern relevance this is such a solid episode of television. Joe Hill, in a short story titled “Best New Horror,” touched on the idea that the surprise ending is seen as a nasty jolt in modern literary fiction (that name-drop totally wasn’t a hit to next week’s essay, not at all). Seemingly complying with this view, Serling’s script tells you from moment one how this ends. Hell, the damn title tells you. This man is obsolete in the eyes of the state and is due for execution. In giving us the ending right up front and we’re left with nothing but a sense of dread and inevitably that sets a viewer on the edge of their seat in anticipation. You want him to go free. Even knowing the ending I wanted him to find a way out of it, but that just isn’t in the cards. Similar to last week’s post on The Fountain, I again have to touch on the unswaying spectre of death and that it isn’t what truly matters, only what you do with the time leading up to that final rattle. Wordsworth chooses to use his last minutes to tell us the importance of what he believes, and does so with a national audience that he was allowed to request. He also holds the state’s stalwart stance on literacy, religion, and humanity up against his own faith and in doing so is able to show the weakness of those that choose to put their faith in an organization that stands against said things.

“The Obsolete Man” is a testament to what someone can do when they stand up to those who tell them they don’t matter, to those who say that they cannot be part of the whole because they serve no purpose. I talk a lot about time and inevitability, about death and what you do up until that point, because it matters so damn much. This life is not about what you choose to do at the end, but who you are up until that point. What Wordsworth does isn’t a last moment change, a sudden insight of importance, but rather a statement of who he has been and the experiences that shaped him. He peddles his poetry, his literature, and his faith to the masses throughout his life only to be told that it isn’t important and he chooses to die showing the world that it is. Someone that did not believe these things, someone that has not had their entire life shaped by them, cannot commit in that way. His choice to share the importance of intelligence, of critical thinking, and  yes – even of his god, to the nation is a profound testament to the things that we are slowly beginning to lose. We get so lost in fighting amongst each other that we forget what is truly important. In his final moments Wordsworth shares his humanity with the chairman, an act of mercy in the face of destruction that he did not have to grant and that would have benefitted those who would have destroyed what he stood for, but he grants it anyway. He gives this gift on one condition and that is the acknowledgement that the views of others exist, that they matter. Without this kindness, this understanding of others and that what they are that is so deathly important, the story would be so bleak and aimless but it’s in this moment that he allows for love and kindness to reenter the equation and we cannot forget this. Wordsworth’s influence, and in that those of Meredith’s performance and Serling’s writing, we’re nothing. Without kindness, mercy, and intelligence all we are is a drab sham of the evils that came before us and in this aren’t we all responsible for what we, as a people, become?