Domestic violence is going to be a hard topic to turn into a comedic piece of cinema, but I’ll be damned if director H.P. Mendoza didn’t take an honest crack at it.

And ultimately he’s succeeded. He managed to have the comedic beats surrounding abuse in the home be one of the strengths of the film instead of a detriment, but it suffers in other areas that wind up keeping it from being the absolute masterwork that it has the potential to achieve. His hand, however, should be firmly planted on his own back for continuous patting because pulling this off was a masterstroke. The charm and intelligence it requires to form this kind of narrative is nothing short of beautiful. Few films exist without flaws, but few have left me as mixed as this and it’s a tough one to talk about.

This is a family story, but it’s really a story about two of them – Declan and his brother Troy. Joining them is elder brother Moe and cousin Tiva, with mother Prisa and Troy’s wife Shelly to round out the principle group. The family has been living in fear since childhood, the absent father having been violent with the children and his wife. Troy has taken over these responsibilities and has proceeded to terrorize his mother, drive his siblings away, and beat his wife mercilessly. We live in a culture that is just beginning to acknowledge the issue of toxic masculinity in American society, one that has embraced victim-shaming up until recently, and this travels beyond just abusive romantic relationships and starts deep exploration into blood.

Open statement of honesty – my brother is a drug addict that violently abuses the people in his life, constantly reappearing to take and attack and beat into the ground. Like Prisa, our mother makes lots of excuses for him and attempts to keep him alive and out of jail. When this film enters its darker territories I experienced a cornucopia of mixed feelings that lay between shock and horror and elation, as though one were living out a fantasy only to discover it wasn’t what they actually wanted. For how funny this is…shit gets real. 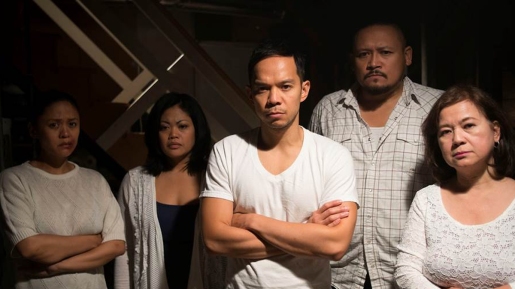 Which leads me to where the problems lie. As I stated, this is a story about the two brothers. The issue is that so much time is devoted to Tiva and Moe as well, but not near enough to justify their inclusion. Moe’s story touches on selfish male ego and the women that carry these men on their backs and it ultimately does not make much of a difference. His story carries no stakes, no weight, and while he is a delightful character the arc just feels tacked on and excessive. Tiva fares much worse, though. In a film that is stating its purpose as skewering the negative male traits the woman portrayed as the strongest in the family has…nothing. She has no arc, no agency, no real character work outside of small moments that feel like they’re meant to lead to something, but they don’t. In fact in a story putting this idea forth as its thesis statement I take major issue with the lack of character progression that exists outside of small instances, not true steps.

And that’s the ultimate flaw of this film. It states that it is about one thing but puts all its effort and energy into being another thing entirely. This is not a film about the relationships between men and women, though it sure tries to say that it is. Nope, this is ultimately a film about sibling relationships and the power they can have in our lives. I can relate.

Declan is an absolutely fascinating character. He’s Filipino, he’s gay, and he’s estranged from his family for the latter while stating that he never experienced racism until he came out and was suddenly expected to be a bitchy twink stereotype. His attempt to dive back into his family dynamic for a Christmas holiday is seen as the ultimate sacrifice to him, something that he’d rather do anything but deal with. And you can tell his brother loves the hell out of him. He’s got a horrid way of showing it, but the fact that Declan escaped and gets to live as who he really is touched a nerve in the younger man and has been a point of envy between them ever since.

Troy is an absolute caricature, but it works. Actor Patrick Epino puts on a perfect performance as a man who seeds chaos, who fails to remember things as they were, and who believes his own bullshit so much that he cannot allow himself to escape and see things for what they really are. He has no one in his life, they’re all scared of him and sick of him, and the only ones he can keep around have a familial tie that they refuse to break.

These two brothers are the heart of this story. The conflict is hilarious and horrid, sweet and sour in a way that I swear to god would taste great on chicken nuggets. When they’re onscreen I could not get enough of it, each moment perfectly executed due to chemistry that is to die for. And it’s here we get our feelings hit over and over, each brother wanting acceptance in the world and acknowledgement of their suffering and having to realize that acknowledgement isn’t enough sometimes. We’ve all wanted to have our pain apologised for, to have it realized out loud, but it doesn’t make it go away. Asking for these things can be cathartic in and of itself, but acquiring them rarely is. Dealing with it on a personal level is much more helpful and this film is about realizing that the damage we do to each other in a family can be fixed only within ourselves.

This film was beyond a pain to judge objectively because of my own closeness to the subject matter, but it really is a wonderful and fascinating thing. There are awkward moments of line delivery, there are a couple of subplots that I have real issues with, and there are a couple of questionable moments with the camera but by the time the credits rolled I was delighted to have seen this. I am urgently hunting for H.P. Mendoza’s other films (Fruit Fly, a musical, and I Am A Ghost, a haunting comedy I’m told) and I cannot wait to see what he does next because hit or miss, up or down, it will be fascinating to watch and pushing the envelope in ways that I wouldn’t have fathomed.