“Shot Through the Heart” is a weekly segment in which I rant about a story that means the world to me. Each week we’ll go over a film, book, short story, or game that touched me in ways that are hard to put into words without them just turning into word vomit. This week we discuss what I consider to be the greatest work by this particular author, a masterclass in terror – “The Jaunt” by Stephen King. 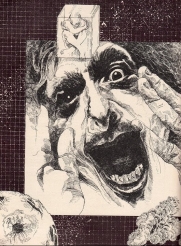 The stories we tell our children are meant to be reassuring, but sometimes we miss the mark. There’s a fine line in fantasies with a moral that each tale walks, something between being too terrifying for young ears to focus and catch the message, and too enticing for them to care. Rarely do we see these kinds of stories truly dealt with in modern fiction in the way that classic storytellers went about it, using their morals to devastate those meant to learn from it. Instead we see a watered down, loving version of our stories that teach us the importance of social bargains and interactions.

King decided to throw all of that at us in a derogatory fashion. To take that and break it down, destroying it with consequences and reality, takes the fairy tale to a new level. And isn’t this a fairy tale? It has something that seems magic but has rules we have to work within, understanding nuanced systems and world-building elements that create a new idea that is ready-made to know innately. This knowledge is born of desire; desire for eschewing fossil fuels, desire to take the stars, and a desire to have found an uncharted land to explore. So why is this a bad thing?

Mark Oates is a father that just wants to calm his children. Sometimes the story behind a discovery contains less-than-candylike pieces of history and the man just wants to keep his children calm while he waits to partake of this new technology. Mark takes something devastating, terrible to behold, and waters it down for children. He keeps just enough danger for it to seem exciting but hides the real danger beneath.

Imagine a world where gaps exist, strange marks between the lines of reality. Think about a world where travel exists through the gaps, but it requires a leap through the lines of existence to create a new boundary, one that is much less dense than what we have now. Our world exists in planes, three of which we can manipulate and at least one more of which we can perceive. When more are added, when something we do not have the capacity to explain is given to us, there are new lines to explore and to fear. Mark may dilute this world for his children, but us dear readers are subjected to everything. And it is this subjection that can drive someone mad. King argues that a lacking of reality in the context of knowledge is the thing that will ruin our minds, creating a new world with unanswered questions that we are implored to try answering despite our limited understanding of what came before. This brave new world, our salvation and our destruction, indulges all of our desires in a modern world. Jaunt travel allows us to get from point A to point B instantaneously, comparable to our hunger being satisfied with a drive-thru cheeseburger. It allows us to expand, our sense of colonialism working its way into our hearts as we expand beyond the stars. Environmental situations kick in and we look at something like this as a commodity, an idea that can be used to create a world or destroy a mind.

What happens when a criminal or a politician gets their hands on the jaunt? Hm?

Exploring that has consequences of its own. Experimentation has consequences. But more consequences arise when someone with less-than-human ideals gets a hold of tech like this. What exists in the gap? What exists in the Jaunt? We’re never given a real picture, but we learn that the government experimented on convicts through a volunteer program. We learn that a mob boss shoved someone in without there being an open portal to arrive at, trapping them forever in the between-space that drives one mad. Experimentation has consequences, but vindictive action brings knowledge of the gains to be had.

I won’t wax too poetic about this one because I don’t want you to feel you’ve gotten all of it. Many count King’s novels as his best work, his legacy to be left behind, but in June of 1981 he published this little story in the pages of “Twilight Zone Magazine” and to many this cemented him as the great horror writer of his age. I’ve often thought that I might drift to The Shining or Pet Sematary for true fright, when I’m angry and want to be scared out of my mind, but I keep returning to this. I own the audiobook version, I have a first printing of the collection it is included in, and I’ve got a PDF on one of my tablets that I carry with me so that I can read it at my leisure. This is one of the most terrifying stories I’ve ever read and it is because of the way it builds to an inevitable climax, giving you every hint it possibly can as to what is coming without stating it in a moment of lazy exposition, and it holds up every time I stop to reread a passage or to think over a bit of dialogue. I can’t just stop at a piece here or there, I want to delve into the entirety of it each time. Many call King airport fiction or a gore-hound but here he’s up to something so subtle, so scientifically executed, that it cannot be seen as such. It even happens in an airport, mundane on purpose to mask what’s coming, and it ends in blood but these things don’t matter. It’s that slow realization, the mounting dread, that makes this a masterpiece. Few writers have the wherewithal to hold back like that and create something truly destructive in its deconstruction. When you’re a child your parents will often lie, stating that everything will be fine despite it obviously not being the case. Mark is trying to do this for his kids and in doing so we are shown that he withholds just enough information to make the potential danger tantalizing. We want to know, and that’s the great human flaw. King isn’t just sending up the lies we tell our children or the fairy tales we’ve sogged up to comfort them, he’s attacking the false fear of the horror genre as a whole. Thrills, the idea that we can survive them and come out okay on the other side, he wants all of these things to be thrown aside in favor of the horror that comes with understanding.

So embrace “The Jaunt.” Embrace the message that knowledge is not a gift, it’s a burden. Embrace the idea that whatever you discover, the consequences may go on longer than you think.