Gerard Way is a bastard. Seriously, no one’s life should be this whimsical.

I’ve listened to a few interviews with him. He always wanted to write comics, but couldn’t break in. Seeing this as a minor setback, he just went to a toy company and designed there. After another attempt to break into the comics industry failed, Way went and founded a multi-million dollar rock band. No biggie. But this gave him a built-in audience to check out his comics work and he finally published a few things. His crown jewel is The Umbrella Academy, a Doom Patrol-esque story that gave him an outlet for his weird, enigmatic persona to flow through. And now Netflix has turned it into a show.

Revolving around a set of siblings adopted and raised by an eccentric billionaire, the show follows them as they unravel the mystery of the upcoming apocalypse. Broken, damaged, stunted adult children that they are, this eccentric cast works together to overcome their mutual self-loathing to come together as a family and it has interesting consequences. Seeing as the source material is quite precious to me, I was nervous going into this. Watching trailers left me a bit freaked out, particularly looking at Spaceboy and realizing that budgetary limitations were going to hold this back a bit. The comic is an out-and-out nightmare to adapt, wild setpieces and strangely visual characters being important to the entirety of the story. You can understand why I was worried.

Turns out the show is pretty damned good.

There have been changes and expansions to the first arc in order to not only fill out a full 10 episode season, but they work in ways that incorporate further elements to set up more stories for these characters to explore. I don’t agree with every change (I miss the conductor of the Orchestra Verdammten) but honestly most of them work. Even the elimination of some of the things I enjoyed in the comic works to expand on some characters and situations, gives the plot more meat on the bones. The comic is whittled down to a razor-sharp edge, a stinging sensation that directly addresses most of the damage childhood caused each of the people without any sort of mess. The show, however, expands to let them explore their anger and pain. It particularly expands the character of Vanya Hargreeves, who was quite thin in the original story.

And I love the choice of Ellen Paige for Vanya. She’s had a stellar but tumultuous career due to a lot of factors, but casting her as The White Violin was a perfect decision. Paige is able to give weight to a character that was, essentially, a beautifully rendered but cardboard stand-in for every misunderstood and angry individual you’ve ever met. In terms of adapting material, they’ve done a stellar job with this character. There are changes I’m not wild about, but I forget what they are when watching Ellen Paige onscreen.

Oh touch on my favorite character? You want that? Oh p’shaw, that’s flattering that you care. Thank you. 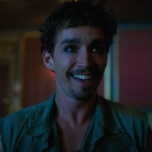 Klaus Hargreeves, a.k.a “The Seance,” is the most interesting character in this show. What they’ve done with him is nothing short of beautiful. I grew up with a junkie, and watching the fear in his eyes when he goes sober is something that I know all too well. Seeing him interact with the dead, though, gives me chills. There’s something endearing to him, a quality that I just can’t quite put my finger on. I don’t think any other character suffers as much, falls so far and yet climbs so high. There are more powerful superhumans in this story, for sure, but what Klaus goes through makes him the strongest character in the show.

The idea of adaptation is a sticky one for fandom. They want what they already knew, but also get excited for something new and are ticked if they don’t get it. It’s a fine line to walk, an unsteady gait on a tightrope and one misstep might mean failure. I think what Way and Netflix have done is a success in most ways, allowing the viewer a chance to see something new. I’ve shown this to a couple friends, those familiar with the comics and those that aren’t. The reactions have been interesting, but the show is connecting with an audience that walks the same line as the creators did in making it in the first place. It’s a stunning feat to have pulled this off at all, the idea that some could have come together to create something that’s as much an adaptation as it is wholly its own animal, is wonderful. I love it, flaws and all.