“Shot Through the Heart” is a weekly segment in which I rant about a story that means the world to me. Each week we’ll go over a film, book, short story, or game that touched me in ways that are hard to put into words without them just turning into word vomit. This week we discuss what I consider to be the greatest episode of animated Batman that ever existed – Heart of Ice from Batman: The Animated Series.

I grew up on animated Batman. It’s still the one that speaks to me, the images and voices coupled with how I view the character. Even now, I still look at Bale’s Batman and wish he sounded like Kevin Conroy (though I’m fine with Ledger’s Joker, that was such a unique performance). There’s power in the way that show catered to an entire generation of kids who grew up wanting to be Batman, to save people and punch the bad guys in the face.

It also taught me that the bad guys aren’t as simple as they seem.

Before this show changed him, Mr. Freeze was a mere thug and a thief. There was nothing notable about him, nothing that truly set him apart from any of the other villains that existed merely for Batman to hit with his fists. He was a low-life, a crass and uninteresting villain that had nothing to latch onto or care about. His point was to be a non-person, and he served it well, but when Batman was revamped for a modern era his villains got an upgrade as well. Bruce Timm, showrunner and EP, wanted to take the idea in a new direction and create reasons to care about most of the villains. Catwoman had been a love interest for a while, Riddler a cheesy know-it-all, and Joker a monstrous prince of crime, but Mr. Freeze received the biggest upgrade.

The episode “Heart of Ice” changed a lot for the character. At his introduction we get to see him be similar to previous incarnations, a thug with a freeze gun that attacks seemingly at random. He’s big, he’s bombastic, and Michael Ansara’s vocal performance is threatening and cold to match the character’s personality. But this is not just a punching Batman, this is a detective Batman that wants to know how his antagonists tick. In pursuing the story, he discovers that Freeze was created by a former boss that not only caused him to become a monster, but did so by attempting to unplug Freeze’s wife. Dr. Victor Fries goes from being not only a man in love and a man with a future to a beast, angry and destructive towards everyone and everything. He sets his sights on his former boss, but shows no qualms about taking down everyone around him as well. Changes like this are, in essence, about what breaks a person and what destroys them. For Fries it’s a terrible thing – it’s love.

Lynchpins are important to character development, and for Freeze it’s his wife. The love he feels for this frozen woman, his sick wife laying like Han Solo in the carbonite, is all he cares for. It drives his entire life and is the result of his accident. Head of GotchCorp, Ferris Boyle, has created a situation out of his hands and a monster beyond control.

I talk a lot about love in these articles – things I love, the love of art, the love between characters, but with Freeze it’s different. The love he feels for his wife destroys lives, drains funds from his company, and results in his own disfigurement. Is makes Batman sick. It makes Batman sick! Within the silliness of the situation, there is tragedy in all aspects outside of the humor. Freeze becomes an inhuman, something between living and dead with the temperature of a corpse. His wife is, for all he knows, dead of either interruption of his freezing process or of her disease. The destruction of his marriage is what makes the monster, and isn’t loss of love a factor in all of those situations?

Love is a tricky business. It’s hard, frustrating, painful, and elating. Nothing worth having is easy, and Freeze has experienced some of the hardest parts of love. He watched Nora Fries suffer, become a frozen body in a tube, and then be destroyed in front of him as his own life eked away. And yet he pursues vengeance, the depth of his pain fueling him. Remaining in love despite the distance of death is something Batman can understand, having lost his own family and using it to fuel his obsessive desires. These two connect on a level that comes to light in Batman’s eyes as he fights a final showdown. When his hand is forced, Batman chooses to spare everyone involved so that justice can prevail. Mercy, justice, love, all of these come together. It’s weird that the day is saved by a hot thermos of chicken soup, but even this is an act of love from Alfred to Batman.

Choice and love, the two factors that make life work, are the theme behind this entire episode. Freeze chooses vengeance over justice, anger over the light, and he’s not wrong to do so. Batman makes his choice in the end, one to save Freeze and his shifty boss at the same time. It’s an act of mercy, but also one of understanding. He, too, turned to a life of violence when he lost his loved ones and cannot fully fault another for making the same choice. Interestingly enough, it’s the same relationship that people point out between Batman and the Joker – that they’re two sides of the same coin. Freeze and Batman are two different reactions to losing loved ones, each deciding on different paths based on their emptiness.

And who are you to say either decision is wrong? Who are any of us to tell someone how to deal with the loss of a loved one? Healthy decisions have nothing to do with pain. Whether by death or separation, we’ve all dealt with this. We make self-destructive decisions, we choose to either look for more pain or to channel it into something healthy, but these pieces of choice are what build us into who we become after. Nightmares and dreamscapes or progression and perseverance, it doesn’t come as easily to each of us, but the way we work through our issues is what we become. Freeze deals with his aggressively and that’s got consequences, but I cannot fault him for that. I’ve dealt with mine that way before, I can’t judge. 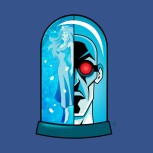 That’s the power of this episode. A tight twenty minutes of storytelling, and we have revamped an entire character into something that isn’t just pitiable, but something we can connect with. When we can connect with a villain does that make us monsters in our own right, or does that make them human? Pain is pain, there’s no helping it, but we’re given a brief display of what we can do with it on multiple fronts. Freeze and Batman, me and you, we’re all just parts of the same display of suffering that builds a new person. Love, coupled with choice, is how we move forward. I love this episode for teaching me that, and it’s been a bedrock for how I view my own loves and pains. I’ve loved and lost, we all have, and so have our two characters. In fair Gotham, where we set our scene, two that love are set against each other and forced to deal with their trauma together. And maybe that’s the idea, that we deal with it together. Maybe through working through loss is a group effort, and isolation has only created problems for all of us. Batman needs to save Freeze, just as Freeze needs salvation. We’re complex people. That’s what Timm did for this character, he made him a whole person.

Are you any better than Freeze?