Couple of years back we were gifted with Jordan Peele’s Get Out, a film that dwelt in the realm of social commentary and horror at the same time. Genre stories like this have been used to make a statement for a long time, going as far back as things like H.G. Wells The Time Machine that called into question the hierarchy of society and posited that one day those put upon would rise from the bottom to consume those above. It’s an idea that has been played with countless times, even as recently as The Dark Knight Rises. And there’s definitely a storm coming, at least in Jordan Peele’s eyes.

He’s playing in that same ballpark this time around. Us came out a couple of days ago, but it premiered at SXSW to rave reviews. Even as recently as a year back we were gifted with a title and a poster and for many that was all that was necessary. With one film we decided that Peele was someone to watch and he’s continued that two years later with his latest offering. It’s a stunningly complicated piece, one that functions almost as a symphony, and it calls your entire viewpoint of modern culture into question.

Let’s get into that deep narrative talk, shall we? 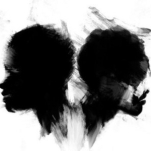 The film opens on a family vacation. It’s a standard family unit, borderline Simpsons-esque in construction, but with some upsets. Winston Duke’s father figure, Gabe, is a wonderfully dorky dad and the kind of man I aspire to be someday, and Shahadi Wright’s Zora is a standard member of Gen Y (glued to her phone, smarmy, embarrassed of her parents’ out-of-date ways). The other two members of the family, however, are different from moment one. The son, Jason (played wonderfully by Evan Alex in the child performance of a lifetime), exists somewhere on the autistic spectrum but I can’t quite tell where. He has a hyper-focus, based around his magic trick toy, and he wears a werewolf mask to stand aside from the world. Adelaide, our heroine portrayed by Lupita N’yong’o, is haunted by an incident from her childhood that involved getting lost in a hall of mirrors during a blackout rainstorm at the Santa Cruz pier. The chemistry between these four really does feel like a family unit, which makes it all the more disturbing when their doppelgangers show up and they all get to play those characters as well.

You’ve seen the marketing, I can talk at least a little about the damned doppelgangers without it being spoiler territory. Climb off my back (just kidding, I love you all).

The film’s true opening is a title card, talking about the thousands of miles of unused tunnels that exist underneath the United States. Abandoned subway stations, mines, things like that are all there and they matter to the film. Bunnies, tunnels, doppelgangers, it’s all very Twilight Zone and it’s why I invoked H.G. Wells earlier. The film spends a lot of time to show us why we’re the Eloi from his book, lazy and loving of our comforts even as we one-up each other and never question why we’re so entrenched in our lethargy. Sure, the family is on vacation, but they are buying boats and spending time and their second home while telling their version of Alexa to play specific music or call people. Little has to be done, but when danger rises from underneath them they have no idea how to handle it or what to do.

There are several social commentaries mixed together in this, from class struggles to infiltration of society by obvious doubles to the discomfort of social groupings. There’s so much to unpack in this film and it is a wonder that Peele stuck his landing. Juggling so many topics, more so than he did with his first film, is no easy task and I was worried about a sophomore slump here. My fears were unfounded, as what was delivered was a triumph of sci-fi/horror fiction that forces us to think about our role in the world and how we’re living in it. What’s tied to our lives, the shadow that lives tethered to each of us? What lies beneath us that we’re ignoring? Do we follow the white rabbit and see what lies in Wonderland? These are the questions we’re being asked and I honestly feel duty-bound to sit back and consider them. The answers are going to be some time coming, but I love that a film can make me feel like this. It’s been a long time since a newcomer was able to push me in this way, to force me to step back and think about my place in the world and how it affects others. Films like this force you to think about which life you’re living, that of the Eloi or that of the Morlocks, and that’s such an important question.

Jordan Peele’s Us is a natural evolution of his talents and a modern masterpiece. Everyone got excited for Get Out but I think this is going to be talked about for years to come, looked back on as something special and as a piece of true artistic expression. I urge you to see this in theatres, in the dark and with others that uncomfortably shuffle or chuckle to ease their own burning tension. Peele is launching a new form of The Twilight Zone in seven days and this soothed any worry I had about that. We’re in good hands, and thank whatever you believe in they’re his and not your own.