This show seems to exist on the same rules as Star Trek films – the even numbered ones are just plain better.

The sixth episode, “Six Degrees of Freedom,” is much better than I expected it to be. I enjoy a good bottle episode, it’s one of the ways television can use to limit sets and extras as well as develop a story that is wall to wall character development. Using this to push the boundaries of performance, a competent director and screenwriter can map out a really gripping story. This was what we got here, a tightly wound and deliciously unpleasant episode that felt a bit goofy and a bit dark at the same time.

Our heroes, a crew of five individuals, are about to launch on a mission to Mars when the news comes in that North Korea and Russia have instigated nuclear war with the United States, unexpectedly. Rather than abort, they decide to launch their mission and survive the apocalypse. From here tensions mount, theories are launched, and the intertwining lives the astronauts get complicated.

I love when the show goes sci-fi, it just makes sense for this new style they’re going for. We got a taste of what we could get in “A Traveler” a few weeks back, and this is an even better episode. It feels like a mixture of Sunshine (2007, Danny Boyle), Alien (1979, Ridley Scott), and even that bottle episode of Community from a few years back. The mounting dread and tension as everything starts to come unglued really drains the life from the crew and it’s entertaining to watch as each moment of it raises the stakes. 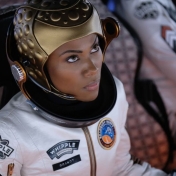 And I won’t spoil the ending, but I loved that. This show has struggled to stick the landing in many places, either going too far or fumbling a clumsy metaphor. This is one of the better finales and it really does work as an effective end to the character narratives. I was worried about it since this show has struggled in this area (seriously, there have been endings that would have made Stephen King blush), but I’m thoroughly pleased with how everything went down.

We got a wonderful episode here and it further cements my excitement for more. I’ve been up and down on the show, but hearing that it got greenlit for season two was a happy moment for me. When this show is on it’s very on, and I want it to continue with episodes like this. Be vocal, people, and let them know what you do and don’t like. I’m happy with so much of this show and seeing episodes like this makes me glad to have stuck with it so far. I’m psyched for next week, and for the rest of the season. Cheers to Jordan Peele and all he’s accomplished so far.