Ari Aster is a grim individual.

Midsommar dropped last week and delivered an extremely vicious look at broken, co-dependant, toxic relationships. Bright, sunny, and distorted, the film feels like a drug trip during a breakup that forces one to confront their own issues in their personal lives while also delivering a genuinely disturbing ride.

And maybe that’s the way to describe the film – disturbing. Early in 2018 we were given Ari Aster’s first feature-length film, Hereditary. One of the best horror films we’d had in a while, it defeated many viewers with its horrific imagery, perfectly pacing, and breathless finale. The film was frightening, but rather than go that direction with his new film Aster has decided to give us a more disturbing feast instead.

Florence Pugh stars as Dani, a woman with emotional problems that is trapped in a relationship with Christian (Jack Reynor). Christian wants out and is on the verge of breaking up with her at the urging of his friends, but when her sister murders her parents and kills herself Dani becomes emotionally reliant on her boyfriend and he is unable to walk away. From here she is invited to Sweden by Christian, as he has planned a trip with his friends. Things escalate. Shit goes down.

The broken relationship truly is the central narrative to this story. While Christian wants out, he also finds a strange comfort in Dani that he can’t seem to quantify. He’s a lazy boyfriend, forgetting birthdays and anniversaries, but part of his relies on Dani’s presence if for no other reason than to have something to complain about. Dani, on the other hand, knows their relationship is rocky and clearly wants to be the one to talk about it, to try to reconnect. Where Christian wants to argue and snipe, she wants to sit down and talk about things. Aster doesn’t shy away from rubbing salt in the wounds when we’re already hurting, haven sprinkled a lot of his own recent breakup into the script to make the relationship in and of itself the real horror. 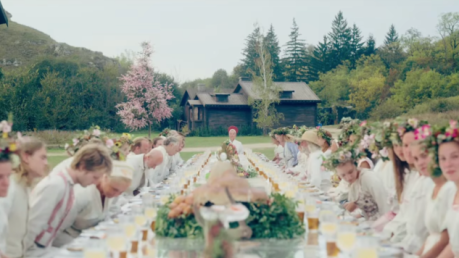 Visually I’d have to call this the most stunning horror film I’ve seen in a long time, maybe ever. Bright, beautiful, and swollen, the landscape moves as a character of its own and evokes an otherworldly sensation. The small community is highly isolated, and adding these other elements to the mix allows us to feel like we’ve entered a completely different world than the one we know. It also leaves every horrific image blatantly displayed, out in the open and never hidden in shadow. It’s a different style than most are used to, but it reminded me a lot of The Wicker Man.

I want to touch on the music by Bobby Krlic, who performs under the name “The Haxan Cloak.” While he usually skews to creepy industrial tones, this time he’s tried to perform orchestral music with an off-kilter feeling to it. What he’s produced is stunning and might be my favorite score of the year so far, it’s absolutely beautiful.

Ultimately Aster has taken a step back from the gut-punch of his debut, but with the elements he’s brought together we’ve still gotten a wonderful film out of him. Midsommar is bleak, beautiful, touching, and destructive. Also there’s a bear in a cage. You’re going to love that.