There are few filmmakers that really bring out the masses like David Fincher. His popularity cemented in the late ‘90s, and he’s been a staple for fans ever since. Able to market films on taglines such as “The Feel-Bad Movie of the Year,” the man has developed a style that is instantly recognizable and famous for creating a feeling of unease as he presents his thrillers to the masses.

I’ve got a soft spot in my heart for this guy, having discovered some of my love of film through his early work. He’s got such a varied catalog and a depraved sense of perfection that can be held up to Kubrick in terms of garnering a performance. David Fincher remains one of the most bankable names in Hollywood for those ready to accept his dark oeuvre.

Alien 3 [1992]: I came to this franchise unaware that David Fincher directed this entry, so you can imagine my surprise when I learned that one of America’s leading filmmakers was involved in this tragedy. He’s famously unhappy about it as well, dismissing any invitations to do commentary or a director’s cut (there’s a workprint cut that’s…better, but still bad). This travesty of franchise filmmaking was reportedly shot without a full script, cobbled together in an editing bay by those without a creative voice in the film’s production, and tossed out without much care as to what fans thought. Fincher has left this one in the dirt. I find it fascinating, but the production history is much more interesting to learn about than the film is to watch. You could honestly skip this one.

Panic Room [2002]: This one isn’t awful, but it’s not great either. Starring Jodie Foster, Kirsten Stewart, Forrest Whitaker, and Jared Leto, there’s an impressive roster to behold but the film just doesn’t stack up to the star power behind it. Each piece of this uneven puzzle doesn’t quite add up, but the entertainment value still stands and leaves this an awkward outlier in Fincher’s filmography. Not a bad film, but also not a good one, it’s an enigma to the director’s fans. Fincher had already become marked as a director of thrillers, but here he stepped into catering to the general audience in a way that just wouldn’t appear again. He’d make other’s of this nature, but nothing quite so easy as this. Most ignore discussing this film when talking about Fincher and considering his prominence that says a lot about its quality.

The Game [1997]: I enjoy this one, I won’t lie. It’s full of more holes than a slice of swiss, but that doesn’t matter because it manages to be as much fun to watch as it must have been for Fincher to shoot it. A thriller about a game designed to give rich people the experience of a lifetime, a taste of desperation and fear? Sure, why not? Michael Douglas is going ape-shit in this one, just tearing through obstacles and scenery like so much tissue paper, and Sean Penn is chewing just as much of the fat. There’s a hammy quality to everything about this, but it was a film geek’s dream in the late ‘90s that delivered on the promise of its premise.

Fight Club [1999]: That’s right, it’s this far down on the list! I adored this film in high school, but much of what it has become soured my view on it. That’s not Fincher’s fault, but rather that of people who decided to take the wrong message from the film (and you’d have to make a conscious decision, the film makes its message very clear). That still doesn’t make this a bad movie, and it’s as stunning today as it was back in the ‘90s. Sexy-as-hell sex scenes, oppressively masculine satire, and Jared Leto bleeding from the ears, this one really did try to have it all. For many, this is the ultimate Fincher film, hilarious and violent yet sensitive and caring. It’s a precise comedy and is shot so closely to Chuck Palahniuk’s novel that he might as well have gotten a screenwriting credit. It’s a shame what modern internet culture has done to this one because I think it’s become destined for unfair scrutiny. I’m sadly part of that, and it forces me to rank it this low on my list.

The Curious Case of Benjamin Button [2008]: A special effects bonanza, Fincher seems to have taken this one out of a desire to really play with what he could do onscreen. This is the only film he’s directed that couldn’t be labeled a thriller, instead of being a touching drama about a man who ages backward based on a classic children’s story. Fincher took the bones of an idea and turned it into an emotional experience, one of the sweetest films I’ve ever seen. It’s compelling (there, I said it!) and speaks to the lover in all of us. The film follows two people, one aging regularly and one aging backward, as their lives collide over and over again. There’s sentimentality in here that doesn’t feel like Fincher, but it has so much heart that you have to wonder what he felt on this one outside of the cold technical stuff he’s used to.

Zodiac [2007]: That basement scene is badass, yeah? The seeds of Manhunter were planted here, and Fincher’s love for the procedural surrounding serial killers is wantonly blatant. People weren’t flocking to this one; it’s reputation as a slow-burn thriller that was more concerned with how? instead of why? was fascinating to me. Jake Gyllenhaal delivers a performance that wouldn’t be rivaled until Nightcrawler, and the character’s dedication to hunting down the Zodiac Killer is inspiring. Fincher, like a lot of directors, is obsessed with obsession. Robert Graysmith (Jake Gyllenhaal) is suffering from a targeted fascination with the killer, and Fincher’s interest in this would follow into a generation of filmmakers that are similarly interested in what makes a killer tick, what makes someone care, and how you can portray this onscreen.

The Social Network [2010]: Facebook as a thriller won’t rope everyone in, but it damn well should. In the internet age, it remains important to know where our beloved social networking comes from, and Fincher’s portrayal of a genius detached from humanity makes an impact. Would everyone be so willing to post everything about themselves if they knew the origins of the idea? I mean, I do, so I can’t comment. The Social Network is a chilling tale of personal obsession, a man’s view of how this kind of internet network can be used to stalk someone and desire their attention as well as make a profit. There’s not a moment of this film that isn’t unsettling and yet we all participate in the product it details. What does that say about us?

Gone Girl [2014]: Fincher’s most recent film was a doozie. Based on the hit novel by Gillian Flynn, it’s a disturbing portrayal of a married couple where each individual has different agendas in the relationship. Not just that, but it also portrays male privilege and toxic masculinity in a way that sneaks in under the guise of a tightly scripted thriller. Flynn herself wrote the script, but the imagery is all Fincher. The color palette is cool. Not in the way of someone that IS cool, though it is.No, this is all blues and grays and uncomfortable colors. Also…when was the last time you saw Tyler Perry in something this outstanding? If your answer is “never” then you’re hitting the nail on the head. The film is a reminder that Fincher is a master when it comes to casting. 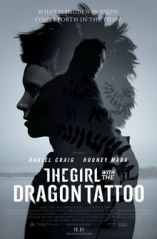 The Girl with the Dragon Tattoo [2011]: Marketed as “The Feel-Bad Movie of the Year,” this one was an awkward entry into the catalog. I saw this on a date with the woman I was dating at the time and she had the patience of a saint, allowing me the indulgence of not only a Ficher film but a movie that was blatantly aggressive towards women. If you’re reading this, you’re a wonderful person and I am grateful I had you with me while I was shaken to my core by this one. Daniel Craig is a great piece of casting, but it’s Rooney Mara that really shines here. Uncomfortable in the worst ways, excellent in the best, Fincher takes a novel he’s interested in and crafts something wild out of it. And what a score! Reznor and Ross created 3 hours of horrifically and delightfully weird music that really drives home the tone of the film. It’s one of the best things put out in the modern era, and I’ll go to the mats for it every time. 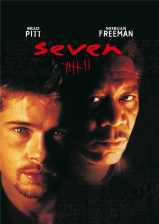 Se7en [1995]: This is a scummy film. The walls crawl with grease and mold, the locations are depraved and sacrilegious and each character has an ugly side that is drawn out of them as the film goes on. I saw this in high school and it’s been ingrained in my brain ever since. Se7en is what a filmmaker can really do when they get lost in an idea. The music, the imagery, the procedural grossness of it all, everything is beautiful in a way that should make your skin crawl. I’ve been more disturbed at scenes before, but the freeze-frame image of what’s in the box completely unhinged me in my teens and stuck with me to this day. Whenever I want a dose of David Fincher this is the film I gravitate towards. Each creative decision, each precise choice, they’re all made with a glorious love of what makes the director a unique individual. Horrifying, loving, and full of life, it surrounds itself in death to make a point about why we should all cherish the days we have. “‘The world is a fine place, and worth fighting for.’ I agree with the second part.”

That’s my David Fincher ranking! I’d love to hear what yours is, and I’d love to fight it out with you!