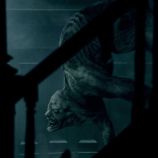 Delving back into your childhood scares can often leave you disappointed, the frights and freakouts of your youth hollow and bland to an adult mindset. A lot of things from my childhood have lived up, and in some ways gotten better (seriously, Alien gets better every time I watch it), but not everything has been a winner. I had a fear of this when Goosebumps was released a couple of years back and found it to be charming and fun instead. I had similar fears with Scary Stories to Tell in the Dark, but for the most part, it got the same reaction from me. Director André Øvredal has put out a fun little film that won’t leave legends, but a certain crowd is going to love it. This is geared to be watched by those that are either 10-14, throwing it on at slumber parties to see something mostly tame but with enough creepy imagery to leave an impression, and those of us who are older but read the books as a kid and were terrified of the visual imagery.

This cleverly structured adaptation takes several of the stories (about 6 at my count), readapting them around an ongoing narrative surrounding four kids in a small American town. The year is 1968, and they remind us that Night of the Living Dead was new to horror fans everywhere. We also get references to Richard Nixon’s reign and the brutal, pointless participation in the Vietnam War that claimed the lives of so many soldiers. We’re introduced to our trio of teen heroes: the awkward writer Stella (Zoe Colletti), lovably pretentious WASP Auggie Hildebrandt (Gabriel Rush), and goofball Chuck Steinberg (Austin Zajur). These three have decided to ruin the evening of Tommy Milner (Austin Abrams), the local stock jock bully that drives drunk and acts like an ass on dates. After pissing him off they run to the local drive-in theatre and take refuge in the car of Ramon Morales (Michael Garza). After they all decide to visit a local haunted house, Stella steals a book from the room of a woman that committed suicide a century before that is supposed to be full of scary stories and written in the blood of murdered children.

Some dark stuff, yeah? It only gets wilder from there.

While the film feels uneven and bonkers in some of its execution, the scares come right out of the books and bring life to some of the scares from my childhood. They don’t all work, with the Jangly Man/Me Tie Dough-ty Walker creature serving up more comedy that jumps, the parts that slow down and take their time work wonders in other ways. The titular scarecrow from the short story “Harold” makes for a fun bit of uncomfortable visual imagery, and the pale lady from “The Dream” is downright terrifying in how slowly methodical she is.

I didn’t altogether appreciate how hard the film relied on jump scares, but the target audience (of younger viewers) that will use this as a gateway drug to horror is going to play right into André Øvredal’s hands. A lot of the commentary on the setting of the film, its open statements on not only the Nixon administration but the way it attempts to point out some parallels to our…*ahem*…current political strife is going to go over a lot of young heads. I’m actually quite surprised at some of the progressive statements made by the film about modern politics and toxic masculinity, but some of it is so blatantly thrown out there that it felt awkward. A good idea that’s unfortunately damaged by writers that aren’t giving enough credit to the audience.

It’s far from a perfect movie, but the way the film uses its scares to serve as an introduction to creep shows for a younger crowd. I went in expecting a kid-friendly film and instead got something of an actual frightfest, thoroughly happy with how gross and over the top it got in places. It’s a fun time and it’s going to do dynamite numbers on streaming services.