I have a lot of hangups about Japanese Animation that are slowly being chipped away at. We have to talk about this because I can’t state how important this film is to me without it being understood that I ignored this art form through most of my life. We all make mistakes, but we can fix them and grow from the experience.

I saw several anime programs as a kid, going through the popular ones so I could keep up with the chatter at school but otherwise not really into it. Things were different from American animation and I didn’t like that, taking more of a prejudiced view and siding with Disney’s style instead (I dug Aladdin, don’t hate me). Things like Dragonball Z, Gundam Wing, or Death Note were things I could get into but I never truly dove into what made the style important and didn’t find stories I truly connected with because of my issues with the strange differences between Japanese and American animation styles. I’ve seen the error of my ways.

My brother is a thorn in my side, but he’s had some positive influences. As the older sibling, I often ignored his tastes and were dismissive of them, but I was captivated by a film he insisted we buy on VHS when I was maybe twelve years old. See, he’d seen some advertisements for Spirited Away and thought it looked fun. We popped it on and I sat there mesmerized by the weirdly visual but oddly stunning forms of movement, the creatures, and the genuine sincerity. At that age, I wasn’t quite sure what I was experiencing but I thought it was delightful. Each frame felt like honest whimsy, despite my issues with the ending (those issues have diminished significantly). I never pursued other Japanese animation or Ghibli films, but that one always stuck with me. Later in life, I heard that name, like a little spell, whispered at night to send away one’s nightmares – Hayao Miyazaki.

Now we gotta talk about the Blank Check Podcast.

My friend, Chris, insisted I check this out. It was a funny-yet-deeply-insightful look at the careers of directors, watching their rises and falls as they faded in and out of the public eye. I quickly devoured their series on M. Night Shyamalan and Christopher Nolan. By the time they got around to Nancy Meyers and Brad Bird I was a staunch fan, but recently they began a new series on Hayao Miyazaki. As a devotee of the podcast, I had to catch up on these and almost immediately began to see the mistake I’d made by ignoring these films my whole life. It’s weird, I don’t know that I would have been able to comprehend what they really were until the stage I’ve reached, but I would have had a blast with most of them. I listened to the discussions but what I really gleaned from these films was more personal, things that charmed me or struck me emotionally and made me happy. Then I watched Kiki’s Delivery Service.

It’s a strange thing, silently bawling over the subtext of a film at two in the morning. Even sitting here, typing this, I’m kind of holding back an emotional reaction. You see…this is a film about the creative process. It’s about melancholy and frustration, about the sting of failure and the triumph of getting your groove back. I came at it from the perspective of a writer, though anyone with a talent they’ve tried to use for employment could easily approach this film with that skew. I’ve hit writer’s block before and watching Kiki hit these moments of sadness and inability to continue working for any reason profoundly struck me. 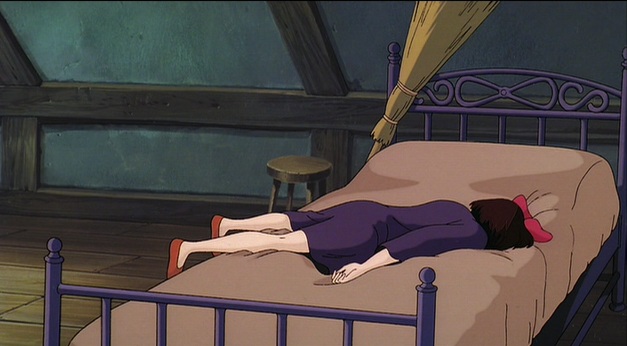 The film is about the creative process and, to some degree, about Miyazaki himself. He’s notoriously vicious about his films being a burden to him. Working on a film about the sweetest, most sincere little girl in the world, and about how she goes through severe depressions due to her disconnect from a more traditionally practical world, it all seems very specific.

Kiki loses her ability to fly. It’s not because she’s under a spell, not because she’s lost something inherent, but rather because she’s lost her confidence and her dedication to this thing. She wasn’t ever great at it, bouncing off of trees and buildings to propel herself forward, but she loved it and had an innate ability for it. People didn’t treat it as something that was all that special, but since there were practical applications they respected it and Kiki’s sweet disposition won her some notice. But then she delivers things that people wind up not respecting, not wanting. She gets sick and lies in bed after delivering a pie no one wanted (admittedly, as sweet as that grandma was I would also not be psyched about a herring and pumpkin pie). I’ve felt it when your hard work and effort aren’t appreciated by those it was for. I’ve been sick, lost sleep, screwed up and had to go back and fix it, all for it to mean nothing to the person I delivered to. Goddamnit Miyazaki.

Writer’s block is basically a concept where your mojo isn’t working. Much like the mighty Austin Powers, if you lose your mojo you have to go on a journey that is very distracting and learn that you never truly lost it. Kiki goes on a similar journey, easing back from her frustration over her powers to take in the scenery as recommended by her cool-as-shit friend Ursula, the artist. The two have a sleepover discussion about putting aside your passion because you’ve lost it, instead focusing on anything else so that you can have a break and rest your mind (getting a bit personal here), and coming back refreshed and ready to follow your bliss again. We don’t get the sense that this won’t happen again, instead left with the idea that life is a series of ups and downs. Kiki’s journey is one of highs and lows, and it’s a roller coaster that pushes us viewers to really create something unique to herself and make use of her gifts to be happy and make a living. It’s hard, and that’s kind of the point.

I’m crying, that’s enough. Look, hunt down and watch Kiki’s Delivery Service and watch it. It’s a story about maturing and leaving childhood behind, a story about following your passions and making it work as a career, and it’s a film about profoundly screwing up and succeeding and powering forward. Get out there and watch it, because I don’t think I’ve ever been as profoundly shaken by an animated film as I was by this one. Few things are so beautiful, particularly for anyone that wants their passion to work for them.