Bong Joon-Ho came onto my radar in 2006 with The Host. I had a friend, he worked at Blockbuster, and things happened that wound up with me watching this awesome South Korea flick about a monster and pain and social structure. It was a blast, and when Snowpiercer hit Netflix in 2013 that reminded me that I had to pay attention to this guy. I’d missed a couple of his films in the intermittent years and had some catching up to do.

Now his films are causing controversy at Cannes, the Netflix format of release really pissing of the theatre community. The film has been boycotted, attacked, praised, hated, and generally just grown into a controversial piece of reddit posts that discuss the merits of all of this but something that is sort of ignored is the most important question…how exactly is the film itself?

It’s a Bong Joon-Ho film, that’s for damned sure.

I had a lot of fun with this one actually. The film plays hopscotch with tones, presenting us with a black comedy about animal cruelty, genetic experimentation, and just where

our food comes from. Sound boring yet? Good, that’ll make what it is all the more of a welcome surprise. This is a loud, goofy, bombastic film that had me cracking up from moment one and didn’t let up until the last 20 minutes or so. I had a friend describe it to me as “funny until it isn’t” and that’s about perfect.

The cast has a couple of stars in it that do a lot of the comedic lifting for the film. Tilda

Swinton seems to have become the director’s muse, her appearance in his last film as a villainess really something to write home about, and now we get her as Lucy Mirando, a woman who is…well, not an antagonist, but not a protagonist or anti-hero either. Instead she’s just a pathetic, misunderstood individual that desperately wants to outdo her father and sister. Alongside her is Jake Gyllenhaal, who is just absolutely going for it in this role. He’s performing as a nature documentarian whose voice never finished dropping, at least that’s how it sounds. He’s ludicrous and offensive but in a way that you can’t help but giggle at. Like the rest of the film, he’s funny right up until he isn’t because at that turn it gets sad. My stomach dropped more than once at aspects of his character.

The main POV we get here, however, is Ahn Seo-hyun, a newcomer from South Korea 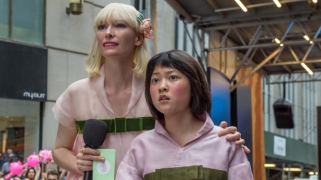 that carries the film alongside the digitally rendered super-pig Okja. The two of them manage to be adorable, endearing, and sweet together. Early on we see her arrogance and lack of care for what anyone else thinks about her or the relationship she shares with a pig. Her grandfather wants her to go make human friends, the company wants to know how she raised Okja so large, and everyone seems to want to take from her. This situation has given her an attitude, one that is aggressive and demanding, and even Okja falls prey to it at times. The difference, though, is that this allows Okja to have a personality. Seo-hyun is personally invested in this intelligent animal and that makes a huge difference to the message of the film.

The cast rounds out with Paul Dano and Steven Yeun as members of the Animal Liberation Front, who are portrayed as ridiculous and ruthless all at the same time, without mercy or care to how they’ll react to that. They refuse to hurt anyone, they demand that the world get on-board with their message, and they only act violently with one another when failing to fully live up to their mission statement. It’s a jab at the organization, but a very sharp one from the director.

Oddly enough, it’s capitalism that both causes and fixes all problems in the lives of these people. The greed of the Mirando Corporation, the idealistic ridiculousness of the A.L.F., and the broken disillusion of Gyllenhaal’s performance are nothing compared to trading cash for goods and services and I could hardly believe it when that snapped into place, let alone worked so well, in the film. A large piece of the answer is that there is no right answer and that people should just try to be the best version of themselves, an oddly difficult task. 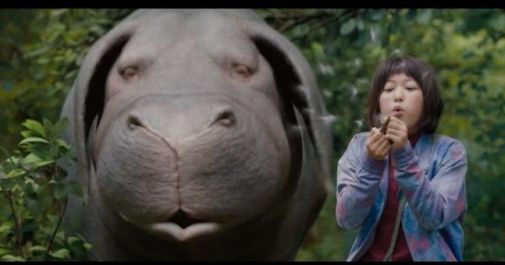 I don’t think this was a perfect film but it’s certainly one of the best to come out as Netflix Originals, particularly recently. If you can snag this in theatres I definitely recommend it, it looks like it would have been gorgeous on the big screen and Joon-Ho is a talented director so that will be worth your effort. But if you can’t…well, it’s on Netflix, and it’s definitely worth your time.