There’s shades of Ozu in this one, and that’s part of what kept me paying attention. I was in a serious state of exhaustion throughout this entire film and it is an absolute ordeal in places. Hirokazu Kore-eda (who I was, surprisingly, familiar with due to his films Hana, Our Little Sister, and After the Storm) has brought forward a film about what it means to truly be family and whether or not that concept is truly sealed in blood. It’s a topic I’ve dwelt on a lot the last few years and while I have problems with the pacing here it resonates with me. It’s impossible to take this as anything but a full skewering of the typical nuclear family, the blood relations and the resentment and the pain that can build up and tear a group apart versus the support and care you can get from those you choose as your own. 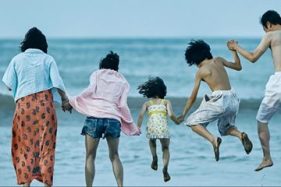 The film begins with a humorous montage that shows us what we’re in for, with Osamu and a young boy named Shota performing several distraction techniques in order to rob a supermarket together. As they walk home in triumph, food stashed in a backpack and treats in-hand, they stumble upon a young girl sitting hidden in some trash. This sets off a chain of events that runs us through the wringer on family and on love versus abuse, on what they mean together and whether or not one can discredit the other. While Osamu and his wife, Nobuyo, attempt to return the girl they are ultimately unable to as they hear her parents inside raving about not even having wanted a child in the first place and then shuddering in horror as the husband begins to beat his wife. Instead of returning her to this environment they decide to keep her, creating a complicated situation for themselves as they are not a normal family unit. The two adults and the two children live together in a household with Nobuyo’s maybe-sister Aki and an old woman who simply goes by “grandma,” an old woman who loves them all but has an unknown relationship to this slapdash family. They form an imperfect but happy family unit, living in poverty off of others and stealing to feed themselves. It’s messed up but also…kind of adorable.

Things spiral out of control and begin to get intensely complicated, but that’s only the end result and not the point of the film. Instead it quietly comments on the aforementioned issues of family and love. The ties that bind are not traditional or even, legally speaking, legitimate. And yet there they live, teaching each other and attempting (poorly) to improve each others lives. At one point the young girl, Yuri, asks them politely not to beat her if she tells them the truth about something. Nobuyo wraps her arms around the poor girl and informs her that, “this is what family does when they love you. They don’t beat you.” And that is the powerhouse message of this film – a family builds you up and loves you, not hurts you. Whether you were born into yours or, like me, you mostly chose them, it’s a complicated situation that nonetheless can bring you happiness if you let it. 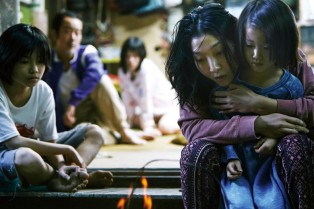 But this isn’t just a film about the power of a chosen family, this is also about taking care in the selection of those people. Being children leaves Yuri and Shota no choice. In fact the couple tries to return Yuri to her family but just can’t bring themselves to, instead taking on yet another mouth to feed (and also another set of clever, sticky fingers). But these people are teaching her nothing but thievery and greed, despite being loving and caring towards her. They excuse their choices away with empty rhetoric, choosing their target reasoning as blindly as these people do their family members. Were the father spouting pseudo-religious diatribe it would be labelled a cult.  Instead of going that dark, though, the family is just a load of lovable and misguided fools that catch too many breaks before reality sets in and that is no longer an option. The ground shrinks beneath everyone’s feet and all chickens can come home to roost.

I’m torn because while the subject matter of this is overtly personal to me I can’t wholly love this. I picked this at the festival because…well, it won the Palme d’Or goddamnit!

That’s impressive on so many levels and on a pure image/performance level this is a stunning film. My issue is with the pacing, with Kore-eda choosing sometimes to dwell on one moment too long or cut another too brief. The desolate shop, with the quiet remembrance of “as long as the store isn’t going to go bankrupt then stealing is ok” ideation hovering over our heads is just not dwelt on enough, and yet other scenes that serve to show a relationship established take up a lot of time despite our existent familiarity with the characters. It’s a strange position to be put in but I have to land in the middle. This is an excellent film that a lot of people aren’t going to enjoy because it’s lacking so many things (an antagonist, an easy ending, familial relationships that most can connect with, and a pacing that could freeze the ice in your veins if you aren’t already used to this kind of thing. I challenge you to see it though, to confront your idea of family and see if there isn’t another valid option because there is.