Cantankerous old men have long been a thing I loved in film. I was turned on to A Man Called Ove last year and adored it, and I connected really well with Gran Turino when it came out several years ago. Instead of being relics, these men are stories layered in trauma that reside in decidedly buried parts of their brain. We don’t owe it to them to delve into their lives and find the special things that are buried there, we owe it to ourselves.

Jewish tailor Abraham Bursztein (Miguel Solá) is our subject in Pablo Solarz’s The Last Suit, a film following the last major journey of an 88 year old Holocaust survivor as he travels from Argentina to Poland. His family has already claimed their inheritance and plan to dump him in a nursing home, so instead of suffering this humiliation at their uncaring hands he decides to forge his own way and bail, headed to the airport and beginning this modern odyssey. He leaves behind plenty of other family, but his need to fulfill a promise is a weighted chain dragging him forward even as his bad leg threatens to give out with every step.

This film works from start to finish as an incredibly focused character study on Abraham, following his interactions with those he comes into contact with on his journey as he grows and learns about the European world he left behind seventy years prior. He survived the Nazi invasion of Poland through the grace of another boy, Piotrek, and when he left he had promised to return one day. This vow is unfulfilled and due to this so is Abraham. He drags himself through the wringer, carrying his anger, mistakes, and pain with him just as he drags his leg (which doctors threaten to just amputate multiple times throughout the narrative). He is never alone throughout this entire journey but he damn sure tries to be, attempting to alienate everyone he comes in contact with either consciously or without real malice. Well, all individuals save one. 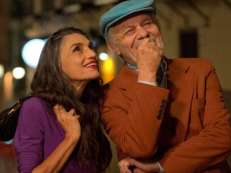 Hotel owner Maria (played by the still stunning Ángela Molina) sets a tone for the film. She won’t take his shit, she calls him out on his attitude, and she refuses to let him have it the easy way. Abraham, however, needs narrative reason to slow his journey in an age where travel is quick and efficient so his stay at this Madrid hotel requires a shake-up and Solarz delivers in a rather easy way; Abraham gets robbed and is suddenly polishing dishes, folding napkins, and taking orders from Maria in exchange for his bed and breakfast. Sympathy comes with a price, and her’s are steep but fair when put to the old man.

Things get more complicated from here but our stage has been set. Abraham, once affluent and ready to comfortably make his way to Poland and his friend, is now broke and desperate to move forward in his quest. Our final stages of this journey through Paris, through Germany (whoo boy, that segment is amazing and brutal and sweet all at the same time), and through Warsaw on his way to Lodz is all of exhausting and endearing. Abraham lets out what kind of person he is, this retelling of King Lear never more than a step away from homage. There’s a kind of magic in his growth, his acceptance of the changes that occurred in the world while he’s been riding it out in Argentina. His discomfort at being shown kindness by a German woman is…well, it’s uncomfortable and it should be. His desperation in a hospital bed lovely enough to garner the aid of a nurse to drive him on one of his last legs of the journey. All of this should feel like easy storytelling but when we begin hitting our emotional crescendos everything else falls away and instead we get a moment of release. 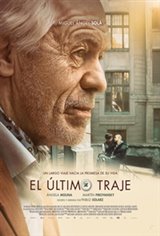 Many films opt for realism, for darkness and hurt that makes a point, but The Last Suit wants you to feel happy and hopeful, to grab hold of idealism in the face of physical Armageddon. All this works because of not only the incredible performances in the film but also the way the film itself is put together. At 92 minutes it could still feel like a chore to watch if not for the tight editing, which never lets the story grow stagnate, and the visual style brought by cinematographer Juan Carlos Gómez. Too often our emotional films of this nature wash everything out in bright light, don’t work to allow the medium to really become a part of the story, but Gómez refuses to accept this and plays with those colors and angles like a seasoned pianist knocking out a classic concerto. There’s never a dull moment and it’s a feast, but when you couple it alongside Frederico Jusid’s score it becomes absolutely beautiful in a way that calls to mind the Cohen brothers or David Fincher.

Solarz has put together a film that should feel safe, easy, and comforting but instead feels like an emotional gauntlet that allows you to emerge on the other side worn out, teary-eyed, and uplifted as you walk out. His film is all of haunting, hilarious, and hopeful in ways that I was not expecting from it. This is the last Holocaust survivor movie you need to see because nothing else I’ve come across has ever painted it in a light that really shows the less-talked-about reason that some of those who made it did so. Will, determination, bottled aggression being unleashed, these are the narratives ballparks we usually play in but Solarz and The Last Suit ask us to remember that many were saved by love, by the care given to them by friends and family that simply could not stand by and watch their friends suffer. It’s a cry to all, a call to arms, to step forward and help those in your life that need it. Be gentle like Piotrek, and look out for your Abrahams. We aren’t blessed with many, cherish the ones you have.