“Shot Through the Heart” is a weekly segment in which I rant about a story that means the world to me. Each week we’ll go over a film, book, short story, or game that touched me in ways that are hard to put into words without them just turning into word vomit. This week we discuss one of the most inventive films by one of the most inventive directors – The Devil’s Backbone by Guillermo del Toro.

Yeah yeah, I hear you. Oh sure, Pan’s Labyrinth is your favorite Del Toro movie. Oh…what’s that you say? It takes his filmography and wraps it in a tight bow?

Lies. Nothing but lies.

The Devil’s Backbone is a 2001 film from Guillermo del Toro that chronicles the period of time a young boy spends at a home for orphans during the final days of the Spanish Civil War. He experiences a lot of things – care from the local doctor, both bullying and friendship from children and adults alike, and a ghost that’s just hanging around the place like it’s no big thing.

The Devil’s Backbone is something special in that it acknowledges the victory of evil. The Spanish Civil War is something a lot of the world doesn’t like to acknowledge because it is one of the times that fascism defeated independence. It is a time when leaders with heart, with knowledge and care, were defeated and hunted like dogs. The reminders of this era lie all over cinema, from Del Toro’s own film Pan’s Labyrinth to The Spirit of the Beehive Victor Erice, but few have the balls to represent it like this. The damage done, the way that monsters were created on both sides, and those caught in the middle serve as a blunt instrument to speak against fascism and the damage it does. Those siding with fascism use any excuse to cause pain, and those on the other side can also fall to their base urges and become monsters looking out for themselves. War is horrific no matter whether you’re in the middle of it or hanging out on the sidelines.

And Del Toro originally represented the war as something to remember, that won’t go away – a bomb. He represented it as a goddamn bomb in a public forum. Also ghosts.

“Que es un phantasma,” is the question that permeates the film. What, exactly, is a ghost? What does it mean to our modern-day sentiments and lifestyles? What holdovers from our lives sit and cling like carrion? In the narrative of Del Toro’s sophomore effort it isn’t subtle. He has placed a bomb, active but considered a dud, into the center of a school for young, orphaned boys. Each tile of the facility is subject to this pain, this bomb, this suffering of the freedom fighters in the woods. Explosive devices surrounded by children demand a payoff, a tragedy of epic proportion, but our director provides a different option in that he decides the political destruction of a nation pales in comparison to the suffering of the children within said country. Starvation, thirst, depravity, and violence are a daily part of their lives and they are all left to live their lives as the school sees fit. The kids are ghosts, the teachers are ghosts, the bomb is a ghosts, Del Toro went hard with the ghosts in this one.

And you know what? He damn well should have.

Our hero, Jacinto (who is adorable) gets left at the school and almost immediately is confronted by both a spector of days past and the bomb, the ghosts of war both working to create a feral atmosphere that assaults our poor protagonist from his arrival. Walking through the center of the school, he sees the bomb that represents the horrors outside invading the interior of the building and almost immediately he also sees a shadow moving in the darkness of a window across the courtyard. 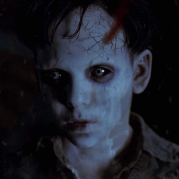 And let’s talk about that shadow. The dead boy is eerie as hell. His skin is porcelain, cracked and broken in the same way that would happen if you dropped fine china. And he is fine china, a child who was alone and vulnerable to breaking. He was dropped, and dropped hard enough to shatter. His head is wide open from the final wound, leaking blood that floats into the ether that we all live in. And isn’t that a disturbing thought? There’s a scene in Steven Spielberg’s War of the Worlds where Ray Ferrier returns from the first wave assault covered in the dust of fried people. That’s horrifically accurate, we as people covered in those we’ve lost as they return to the ground from which they came and how we’re covered in their remains. We eat food that they’ve eventually served as fertilizer, we breathe the air they’ve been scattered in, and we drink the water they’ve pissed away. The ghost, a boy named Santi, has become part of the ether we live in as his spirit bleeds into the atmosphere of the school.

Listen…I could go on and on about this, but the fact is that I love this damn movie. Del Toro has been a weird study of mine for years. His dedication to design, to sets, to music and characterization and symbolism, they all eat at me when each of his stories come to fruition and make no mistake, this guy is a storyteller. He’s a maestro, waving his baton over an orchestra of designers and artists and performers that all come together to weave into a symphony of tragedy and he’s making a point Del Toro’s most personal films have always been about privilege, about the way that power affects the little guy and those who weren’t born to it. Each piece (that word was chosen deliberately) is a collage of meaning mixed with passion and The Devil’s Backbone is his best work. It’s a special little film that goes ignored in his catalogue and that fact is criminal.

Guillermo del Toro is a man that gives all of himself to each project, for better or for worse, and he delves into things that we don’t like dwelling on. Like Aronofsky, but with a bit more whimsy and a bit less weight, he spends a lot of time on death and what comes after as well as circumstances surrounding it all. Hellboy, Cronos, The Devil’s Backbone, hell even Pacific Rim focuses quite heavily on death as a motivating factor and as a real, tangible consequence (though that last one doesn’t embrace it as much as it bloody well should). 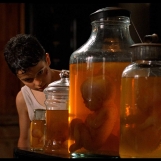 Contemplation on death, on its ever-looming presence in our lives, is the real theme at the core of this film. The way it is a spectre both literal and non-literally. Heck, the doctor keeps a fetus sprouting the title malady in a jar on his shelf as a kind of macabre display. It’s in Jacinto’s life from moment one, as his father leaves him and he is at that point dead (well, for all intents and purposes).  Bringing all of our characters into the discussion let’s the doctor, let’s Santi, and let’s even all of the other children shine out and display death to their little world.

And then there’s that goddamned bomb.