Wow. That was…something else, that’s for damned sure.

Dario Argento’s colorful, neon-tinted slasher/occult film has become regarded as one of the key horror films, a lynchpin that we can look to for style and surrealism in equal measure. In 1977 the film hit audiences and the recent 4K restoration has kept it in the public conscience (see it if you can, that restoration is beautiful and as an added bonus the score has been remastered as well) but it seems Luca Guadagnino, director of this “cover version,” has been trying to completely revamp it for over a decade and has finally been given the opportunity to put it out there.

The piece exists in several acts, an extended structure that follows the arrival of Susie Banion, played this time around by Dakota Johnson, at the Helena Markos Dance Academy in West Berlin and joins the troupe under the tutelage of Madame Blanc. Her instructor is just one of 3 characters played by Tilda Swinton, and I’m not spoiling the others because you can figure them out for yourself. This one is obvious, and it’s the relationship between these two that drives the narrative and seemingly the horror.

They’re witches. Everyone’s a witch at the academy. At least everyone in power is a witch. Pretty sure a few of the girls are as well. Actually most of them are witches.

We’ve had a resurgence in witch-related horror in the last ten years or so. A post-Harry Potter world was ready to take the idea back from it’s charming and sweet standing in the public eye and make these women scary again. Ryan Murphy made them sassy on American Horror Story, Robert Eggers made them visceral creatures of shifting satanic loyalty in The Witch a couple of years back, and even today we had the 4K restoration of the original Suspiria and a really gritty, dark revamp of an Archie Comics character in The Chilling Adventures of Sabrina. These works are similar to the Satanic Panic of the 80’s, the literature that was meant to instill in people that demons are constantly coming to eat your everlasting soul and that powerful women were going to be the ones enticing you into that darkness. Witch culture has always been a sort of misogynist ideal that draws people into fearing strength.

Guadagnino’s film doesn’t exactly even want to serve as a fix to this, a stopper in the bottle. He wants to break the damn thing. These women are in complete control over the environment around them and most of the lives there, but they lack understanding of what exactly they’re messing with. In keeping with Argento’s unofficial “mother trilogy,” the film touches on the idea that there are three out there – Mater Lachrymarum, Mater Tenebrarum, and Mater Suspiriorium. The mothers of tears, darkness, and sighs. These three great witch mothers are meant to predate Christianity, almost predating the written word, and a psychotherapist named Josef Klemperer is hell-bent on confronting those that control his world. 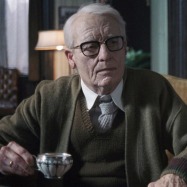 Klemperer is played by…well, let’s say it’s newcomer to American audiences Lutz Ebersdorf like Guadagnino claims, and the performance is absolutely heartbreaking. A survivor of WWII, he still longs for his wife Anke and it’s this loss to fascism that leads him to pity Patricia Hingle, a runaway from the academy who is his source of knowledge about the witches. These thematic ties are also held up alongside the hijacking of Lufthansa Flight 181, an event in the 1977 German Autumn and German youth backlash to the denial of the country’s culpability with the Third Reich’s actions. It sticks on fascism and hierarchy, on the damage that an older generation perpetrated and how their children are dealing with it. And we also see how the children at the academy are dealing with the sins of their predecessors, the coven of witches struggling amongst themselves to claim the title of “Mater Suspiriorium” in the rituals they hold beneath the school. There are a lot of buried secrets that the group is refusing to deal with outright, instead choosing to struggle for power amongst themselves.

And it’s in this that Blanc’s relationship with Banion comes into play. The encouragement to dance, to become a lithe body capable of being so much more, and to see the thing the young woman is capable of without even being aware of it are all so important to Madame Blanc. As Suzy dances for the first time, showing her passion and animalistic skill, she twists and turns and inordinately uses a magical force that breaks, twists, and mutilates the body of a student in another room. It’s a scene that has been used to promote the film with critics and festival goers that left many squeamish. Blanc, on seeing this engrossing display, sees buried potential. Suzy is from a Mennonite family, and American-born individual that is part of a highly conservative style of life and is freed for the first time. She is opened up to fascism and brutality, but begins to embrace aspects of the culture of witchcraft that she finds herself rooted in. Blanc encourages her, hoping to draw out something I can’t say without ruining the film, but by the time it reaches its conclusion the reality of Suzy’s situation becomes so much more than what Argento accomplished.

And that gut-wrenching scene, that twisting of a young body into a hooked-up contortion, is one of the least disturbing images in the film. This is a gore-hound’s film, no question about it. Blood sprays everywhere at times, and at others it merely leaks out and drips as the plot drips out its secrets all over the floor. The blood serves a purpose, has meaning, but those shocked by its appearance will sicken on first viewing because it’s…a lot. 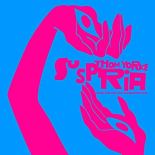 I want to talk about the score for a minute. Goblin’s score for the original film is hailed as one of the best of all time, a weird and eccentric energy radiating from it to match the hyper-stylized neon that Argento peppered into the imagery. Guadagnino is going for something more grounded here, and in keeping with the slow-burn plot and imagery we get a step back in the music. Not that this means the score is lesser in any way, but it’s a different animal. Hiring Thom Yorke of Radiohead fame to create weird music for your witch movie is a genius move, and what we get is a minimalist score that incorporates off-beats, poorly-tuned keys, and synthesizers to blast us when necessary and pull back, even vanish completely at times when it is more appropriate. We aren’t beaten over the head with anything wild, we’re calmly and quietly driven insane by the odd, thundering noise of the score. Yorke’s vocals even get to shine in places, bringing back his gorgeous wail that has been so crucial in modern-day Radiohead. 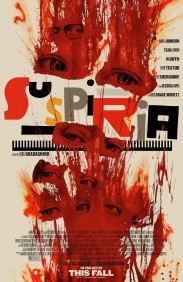 It might surprise many, but walking out I was unsure if I liked this. I had the same reaction to the Robert Eggers film The Witch a couple of years ago. Films of this nature need to marinate, to breathe. You’ve popped the cork on a good bottle of wine here, let the tannins have a bit. I got home in a daze at 1 a.m. and I’m glad I didn’t try to write this up then because I would have been middling to a film that deserves praise. Luca Guadagnino has delivered one of the best horror films I’ve seen in the last decade, and its success is even more impressive when you recall that it’s a redux of a cult classic from a giallo legend. Vile, depraved, obsessed, and personal – those are words we can use to describe this wonderful cacophony of madness that we’ve been gifted with. We’ve also been given a plot, which is more than Argento gave us and that’s appreciated.

This is better than the original film, though they can each be judged on their own merits as incredible works. And I hope you get a chance to judge this one, because that 3 hour runtime is well worth it.