There’s a serious problem in your brain when you figure out what your favorite films are. Usually they revolve around something that hurts, whether physically or emotionally, and you always look back on them and wonder, “What the hell, how did I get here?” And sometimes you have that clarity, that understanding that opens worlds. 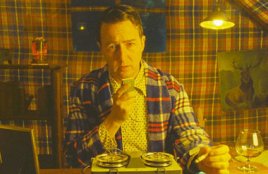 In 2012 I was staying the weekend at a friend’s place in Lincoln, Nebraska. We had been out drinking pretty profusely and if I’m being real I was still getting over a breakup with someone I thought was pretty great – had dated her a year – so I was in an ugly little spot and kind of loving the hangover a little bit. I’ve been an early riser for a while, at least compared to the other people in my life, so I shot up out of bed and immediately regretted that for a few minutes before stumbling downstairs, hating light and life and everything that shone brightly in the darkness because my pupils were still drunk and having trouble keeping that excess light out. While heading down these stairs the dogs began barking, mixing with the giggling of my buddy’s brother and causing a sensation in my head that can only be described as hell. I thought he was laughing at my pain (because of course I did) but to an everlasting joy I discovered that he was giggling at a movie on the tv. I shuffled over, plopped down next to him, and watched the rest. I still owe you for that, Brandon, and feel free to call that one in whenever.

Moonrise Kingdom is a 2012 film from Wes Anderson, quirkster supreme among film hipsters, and it follows the adventures of two very damaged kids as they run away together on a small island off the coast of New England in the 60’s. That’s it, that’s the plot. It’s special to me goddamnit and I’ll teach all of you precious angels why you should love it if you stick with me for just a bit!

I was in awe of this the first time I saw it because, if I’m being honest, I just didn’t know what I was watching. It was so…egotistical. The symmetry, the absurd costuming, and the weirdly flat but charming performances were so insane that I couldn’t wrap my throbbing head around it at first but I found it oddly magnetic. I came in pretty late, as our leads Susie (Kara Hayward) and Sam (Jared Gilman) were defending themselves against a gang of marauding boy scouts. And I definitely mean marauding because these kids were armed to the teeth, it felt like Mad Max at that point. They had a bow and arrow, a baseball bat full of nails, scissors, knives, and all sorts of instruments of death. Sam toes a stick towards them, warning the boys not to cross it, and they do. A quick montage, the yip of a dog, and suddenly they’re all fleeing. One of them is bleeding profusely from his back. Then there’s a dirtbike in a tree off the side of a cliff.

You see why it took me a minute, right? Give me a break, I came to Wes Anderson later than most.

I later hunted down the DVD so I could watch the whole thing and it was an absolute revelation. I’d never seen anything so loving, so full of heart, or so absolutely in control of a director’s talents (he would later take it one step further in The Grand Budapest Hotel and Wes Anderson the most Wes Anderson-y thing that he’d ever Wes Anderson-ed all over the place). It’s odd to find love in a piece of art, but I found it. I hadn’t felt like this since Darren Aronofsky’s The Fountain, and that was huge to me (as many of you who read my drivel may know).

We begin our tale in a house, grand and dramatic music blaring, and get to see Susie as her life crumbles around her. Parents ignoring each other, brothers acting like little shits, and staring through her binoculars in search of more. She’s plotting something, and she is not to be reckoned with. She is instantly more dangerous than any other character in the film due to the sheer amount of willpower she exudes in the film, and she establishes herself as the driving force of the plot. She’s writing to someone, and it isn’t going to bode well for those in her life.

Cut to a boy scout camp, led by Randy Ward (Edward Norton), that discovers its least-popular member is missing. Sam Shakusky has flown the coop, resigning from the scouts in a letter that apologizes for the equipment he is taking. Sam and Susie meet up in a field and execute the plan that has been a year in the making – they’re running away together. 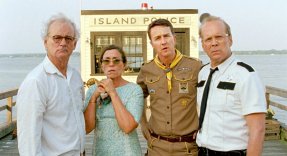 Have you ever been in love? Fleeting, broken, horrid, happy, desperate love? It feels a lot like watching this film. Two people, hurt and longing to just be happy for even a few days, disappear from the lives of everyone that knows them. And these two are loved, but perhaps loved improperly. Sam isn’t loved by his foster family, but he’s loved by Scout Master Ward and his disappearance hurts the man deeply. Likewise Susie may not be in a happy environment but she is desperately loved by her parents, who are on the same page for the first time in years as they search for her.

I have to bring up the music in this film early in the article because it is so damned crucial. Anderson lays out the entire plot of the film in the opening number. The track comes from Benjamin Britten’s brilliant “Young Person’s Guide to the Orchestra” piece, which takes overly complicated ideas and breaks them down for the understanding of a child. The winding orchestral music soars as a child explains each separate piece, detailing what it sounds like and how it differentiates from the whole of the orchestra while instructing the audience as to what it means. He then puts them back together in the over-the-top dramatic piece that leads us into our plot and this is so insanely crucial. The plot isn’t laid out beat for beat, but the theme is. Wes Anderson is taking the themes of the story, a complicated adult idea like true love, and breaking it down for the eyes of children, before recombining it and putting the pieces together so that it may also be understood by adults that think they know everything but are, in fact, childish themselves. Love isn’t simple, in fact it might be the most complicated thing on the planet to navigate, but it can be explained to even a child by breaking down the complexity of it and walking them through the nuances and different meanings of each and every part of it. Anderson understand this, knows that even a child can love purely if they understand what they’re up against. That’s just the beginning, I won’t ruin several surprises by doing too deep of a dive into the score.

This isn’t going to land on first viewing. Know this, embrace it, and revisit multiple times.

These adult relationships are complicated. Scout Master Ward is feeling inadequate after losing Sam, Mr. Bishop (Bill Murray) is feeling empty because he cannot be enough for his wife and children, and Mrs. Bishop (Francis McDormand) is straight-up schtooping island cop Captain Sharp (Bruce Willis) as one is want to do with a former love, at least if the love hasn’t died. I told you, things are complicated in adult-land.

Plots have to follow fairly predictable lines of thought in these scenarios because to add much to them would take away from the themes, one of which is that adult relationships are predictable and fleeting. Nothing lasts forever, at least not without growth and work. 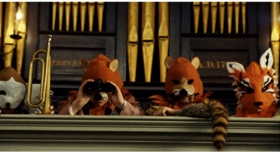 There’s a strong sense of death and catastrophe about this story, and you all know I love that stuff. I live for stories about death, partially because I know it as an inevitability and something that we all meet eventually. That does not, however, make it easier when it’s closing on the death of two children in love. Thank every deity you believe in that it doesn’t come to that because I would not have been able to handle it, then or now, and I have a stronger stomach than most when it comes to stories. The twists and turns the story takes eventually lead to an inevitable, “Romeo-and-Juliet-esque” ending that I felt a mile away and was so relieved to see unrealized. Anderson isn’t bowing out at that point, he’s showing us that it’s okay to be positive and feel happy when things work out. They may not last, but they work out.

At the end of the day this might not be Wes Anderson’s best film, but it has more love in it than anything else he’s put out in his entire career. From the score to the casting to the absolutely gorgeous design and camera work, it’s a masterpiece. Few things have warmed my heart like this when credits rolled and very little since has made me the absolute mess that this has. I cry during movies, it’s true. Hell, I cried at Ralph Breaks the Internet this week. That should give you an idea of what this film does to me in its triumphant, beautiful, and wrenching final moments. Every time I watch this it turns into a multi-day marathon, watching it over and over and eating up each moment, analyzing every frame, and breaking down to an absolute wreck as I feel the love between these two kids and the adventure they share. It’s a real adventure, but the real quest is for the love they don’t fully understand but dive in on. Both kids, after lifetimes of heartache and pain, are still able to step away and find something real and meaningful in the darkness they inhabit each and every day.

In perhaps the most beautiful moment of the film, the two characters have what may be one of the most real conversations ever had by two people in the history of film.

“I love you, but you don’t know what you’re talking about,” he says. 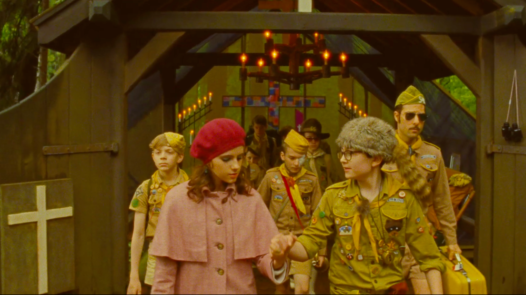 And isn’t that love? Two people, neither of whom realize the monumental thing they’ve undertaken, are still unabashedly able to share what they mean to each other in a moment of open vulnerability. It’s aggressive, beautiful, and painful and even though neither truly understands the other yet (and after a lifetime together couples still have things to discover together) these two kids are able to find beauty in each other’s damaged psyches.