After the absolute shitstorm director Rian Johnson went through with his last film I can see why this feels like a bit of a victory lap. His humor, pacing, and confidence are just seeping from every pore of this nigh-on unwieldy beast but….the dude nails it. 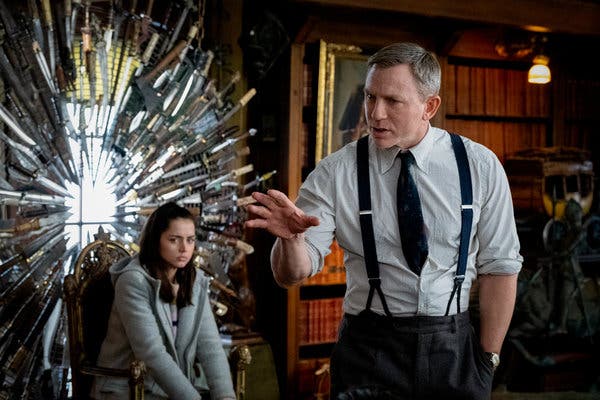 Comeuppance is a true theme behind this whole sordid affair, on all fronts and from all angles. Family is a torturous affair but when there’s money on the line, things can get ugly. They stand with “knives out and beaks bloody,” at least according to the gentleman sleuth Benoit Blanc (Daniel Craig). The family is laden with opposing points of view on how everyone else should feel or behave, bickering constantly and behaving like a pack of rabid dogs. You see, the family patriarch and ridiculously wealthy author Harlan Thrombey (Christopher Plummer) has just committed suicide in the most ghastly fashion. The guy took a letter opener and opened his throat instead of the day’s mail. This occurs immediately after his 85th birthday party, something we see through the eyes of the family and everyone remembers it in a different way because they’re, well, self-centered assholes. These assholes include Harlan’s daughter Lynda (Jamie Lee Curtis) and her husband Richard (Don Johnson), his son Walt (Michael Shannon) and the man’s wife Donna (Riki Lindhome) and son Jacob (Jaeden Martell). Along for the ride are his daughter-in-law Joni (Toni Collette), his granddaughter Meg (Katherine Langford), his spoiled grandson Ransom (Chris Evans), and his best friend/day nurse Marta (Ana de Armas). You got all of that? Good, because this is where things really start cooking.

You see, Benoit Blanc believes that someone has murdered the old man. Whereas everyone else looks and sees something obvious, this Kentucky-fried gentleman is insistent that something unruly has occurred and sent the old man to his grave prematurely.

This is one of those rare moments when a comedic thriller, a whodunnit, can be so wonderfully pulled off that the shock of it can send you reeling. Rarely do I cackle my way through a murder mystery (Clue doesn’t count, though that film will be endlessly compared to this one), but the mixture of humor and sheer delight at the paths Rian Johnson chose to take. There’s not one bad performance in the bunch because these are some wonderful performers. This is a rare moment when the script feels so tight, so fun and weird and insane, that this murderer’s row of actors signed on for the sheer delight of pulling this off. A whodunnit cannot merely be treated as a passing fancy, you have to enjoy the luxurious grotesqueries about it. A whodunnit that isn’t cheeky, silly, skewering, and obscene is just a story about a murder. Things like this insist on being full of wealthy, terrible people locked up in a huge mansion with enough MacGuffins to make a pulp writer swoon. Johnson is pulling from his favorites here, everything from Sherlock Holmes (this is blatantly referenced) to Hercule Poirot (this isn’t blatantly referenced), and he’s modernized the same idea for a new era.

The modernization isn’t exactly subtle, either. He’s skewering ultra-liberals and alt-right diehards all at the same time, as well as incorporating modern technology like television and cell phones into the game he’s set afoot. Recorders, secret phone calls, e-mails that go ignored, everything is being used to full advantage. On first look, at least if you ignore the cars, this could have been set in the 19th century quite easily until the technology weaves itself into the increasingly complicated plot.

I talked about comeuppance in the film, and it truly is a theme. Family members get it, tertiary members get it, and everything goes places you never could have imagined but that make so much sense that it couldn’t have gone any other way. Rian Johnson himself gets some comeuppance after the holy war he started with Star Wars: The Last Jedi (a film I like but have issues with) and gets to take a victory lap, proving that yes – he’s just as clever as his work suggests.

I’m not going to spoil this one for you, not in any way. Woe should befall anyone that dares to mess this up for you because the film is way too interesting to watch anything but blindly. This entire presentation is like laying in a jacuzzi for a little while with a big-ass cigar and a tumbler of particularly good, single-malt scotch: you can hear all about it but that clinical approach only ruins the delight of actually experiencing it. Knives Out probably won’t be remembered as Rian Johnson’s best film, but it might just be his most entertaining. Goofy, weird, delightful, messed up, and twisted enough that I think the script might actually resemble a child’s silly-straw, this is a good time and it’s an absolute must-see during the holiday season.